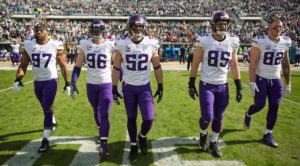 This is it, the final three games of the 2016 NFL season and the Minnesota Vikings basically need to win all of them to even have a shot at making the playoffs. There are scenarios where the Vikings can get into the postseason with one more loss, but their chances dramatically decrease if they can only win two out of their final three games.

What are some tactics that the Vikings can use in order to get a win on Sunday and keep their name in the NFC playoff picture?

DO – Use Adrian Peterson more as a decoy than anything else

Despite their pass defense’s current ranking (26th), Indianapolis has played pretty well against opposing wide receivers in 2016. They have been able to keep such talented pass catchers as Demaryius Thomas, DeAndre Hopkins, Alshon Jeffery, and Brandon Marshall out of the end zone during each of their matchups this year.

So in order for the the Vikings to free up some of their receivers on Sunday, they must try and run some plays that normally are not called when Peterson lines up in the backfield. Instead of running the ball on 2-and-short or 3rd-and-short situations, try a little play action to see if the Colts’ defensive backs take the bait and leave a Minnesota receiver open downfield for a big play opportunity.

For most teams in today’s NFL, this would seem like a hard task to accomplish. But not for the Vikings’ defense, who have already done it seven times this season.

DO – Test out the Colts’ backup blockers

Minnesota knows all about injuries this season. But on Sunday, Indianapolis will be without three starters on their offensive line. The center, right guard, and right tackle who are expected to suit up for the Colts this week are all playing in their first NFL season.

But it is not like Minnesota has anyone that can rush the right side of Indianapolis’ offense. Oh wait, Danielle Hunter.

This might be taking the easy way out, but if the Vikings cannot come out of Sunday with a win, the hopes of playing in the postseason are basically done for.

Instead of relying on other teams to do the dirty work, Minnesota just needs to control their own destiny. The wins do not have to be blow outs. But as long as the Vikings have more points than their opponents at the end of each game, then that is all that matters.

To quote the late owner of a familiar silver-and-black NFL team (who frequently wore glasses that looked like he stole them from one of the characters on Golden Girls), “just win, baby!”