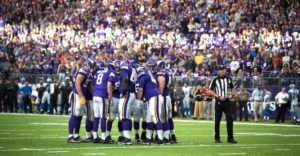 This whole losing thing is really starting to get old. Maybe the Minnesota Vikings could come up with a few plays this Sunday to actually end the game with more points than their opponent?

Strange concept, but if done right, it may work.

The Vikings came close last week, holding the Detroit Lions to three points and 36 total yards in the second half until their very last two drives. But unfortunately, it was those last two drives that ended up winning the game for the Lions and handing Minnesota their third straight loss of the season.

Now in order for the Vikings to avoid losing four games in a row this weekend against the Washington Redskins, there are a few suggestions they may want to take into consideration.

To explain how bad the Redskins run defense is this year, just think of it this way. If Minnesota elected to use their new fullback in Linval Joseph to get the majority of their carries on Sunday, he could easily run for at least 350 yards.

Unfortunately for the Vikings, Joseph also has to play defense so he is unlikely to be the second coming of Jim Brown this weekend.

But basically, Washington’s defense is very poor at stopping the opposing offense’s rushing attack this year. The Redskins have allowed 12 rushing touchdowns so far this season and team’s are running for an average of 123.8 yards per game against them in 2016.

Minnesota’s offense just needs to find a way to run the ball against the Redskins on Sunday. No matter if that involves calling a jet sweeps for Cordarrelle Patterson or handing the ball off to Zach Line a few times up the gut, the Vikings just need to focus on exploiting one of Washington’s top defensive weaknesses this weekend.

DON’T – Forget to tackle someone (even you Mr. Rhodes)

One of the biggest flaws of Minnesota’s defense during their three-game losing streak has been their inability to tackle. What seemed to be a strength of this team at the beginning of the year is quickly losing them games.

The Vikings have one of the NFL’s best pass defenses in 2016 that is only giving up 206 yards per game to opposing offenses. However, almost 60 percent of the passing yards Minnesota has given up this season have been yards after the catch (121.3 per game).

If the Vikings can get that percentage to around 50 percent on Sunday, it should greatly improve their chances of winning.

Where have all the sacks gone? Minnesota has just two sacks in their last three games after bringing down the opposing quarterback 19 times in the first five weeks of the season.

Sacks and pressure lead to quarterbacks making mistakes and defenses forcing turnovers. Well the Vikings have not had a whole lot of either recently. Luckily Minnesota’s defense gets to face a Redskins team that has turned the ball at least once per game this season and will have a banged up offensive line on Sunday.

Matt Jones, Chris Thompson, and Robert Kelley all sound like the generic names given to characters in an upcoming episode of Law & Order: Special Victims Unit. But actually, these three guys are part of the group that has helped Washington rush for 100 yards or more per game against four of their last five opponents.

After only allowing one team to rush for over 100 yards in their first five games, the Vikings’ defense has allowed two teams to do so in their last three. Stopping the run has definitely not been one of Minnesota’s recent strengths.

The last two times the Redskins have played at home, Jones has rushed for at least 100 yards. A third straight game of this kind for the running back certainly would not improve the Vikings’ chances in preventing the team from losing four games in a row for the first time since 2013.