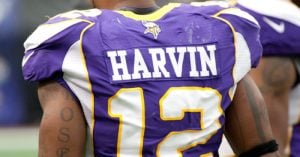 Your time with the Minnesota Vikings was greatly appreciated by at least some of the team’s fans. On behalf of those fans, there are a few accomplishments that you should be thanked for.

Thank you for opting to skip your final season of college football at the University of Florida and making yourself eligible for the 2009 NFL Draft. Extended education is not as essential for many of today’s careers and you realized that before you attended your final year of free schooling.

Thank you for testing positive for marijuana at the 2009 NFL Combine. Without that, your stock in the draft would not have fallen and the Vikings would not have been able to snag you with the 22nd pick.

Thank you for realizing that the positive drug test cost you millions of dollars and having a productive offseason was the first step towards a chance at redemption. The hard work you put in before the start of your rookie season paid off when you caught your very first NFL touchdown pass in your very first NFL regular season game.

Thank you for playing a gigantic part in one of the most exciting games in Minnesota’s history when your team faced off against the San Francisco 49ers in 2009. Without your 101 yard kickoff return for a touchdown, your teammates Brett Favre and Greg Lewis might not have been able to make their magical connection.

Thank you for continuing to thrive in your inaugural NFL season. Your production in 2009 resulted in you becoming the sixth member in the history of the Vikings to be named the NFL’s Offensive Rookie of the Year by the Associated Press.

Thank you for fumbling the ball to the New Orleans Saints in the fourth quarter of the 2009 NFC Championship game with the contest tied at 21. It was at that moment that you realized what the rest of the league already knew.

The Vikings cannot have nice things.

In your second season in Minnesota, thank you for doing what everyone else on your team wanted to do by getting into a heated argument with your then head coach Brad Childress. He questioned your effort in practice and that seemed to be the last straw for you in a series of events that included releasing wide receiver Randy Moss and starting the 2010 season with a 2-5 record.

Although you improved upon the numbers from your rookie season during your second year in the league, it was not enough to prevent the Vikings from finishing with a final record of 6-10. But hey, it got your buddy Childress fired.

Thank you for giving the Minnesota fans a glimpse of hope on the very first play of the 2011 NFL season by returning the opening kickoff against the San Diego Chargers for a touchdown. It would end up being one of the few bright spots for you and the Vikings that season as the team would finish 3-13 and miss the playoffs for the second straight season.

Thank you for allegedly requesting a trade during Minnesota’s mandatory mini-camp in 2012 only to send out a tweet a day after the alleged request that said you were, “clueless on the crazy reports.” Shame on anyone for thinking that you would want to be traded from a last place team after you just had the best statistical season of your career?

Thank you for pretending that you still wanted to be in Minnesota for your fourth year in the league and for returning the opening kickoff for a touchdown against the Detroit Lions in Week 4 of the 2012 season. That return of 105 yards ended up being only six yards less than the total amount of passing yards your quarterback Christian Ponder threw for during that game.

Thank you for possibly being the only person to have actual proof that they have had an argument with the man known as Leslie Frazier during a game against the Seattle Seahawks. Your former head coach was a nun compared to the rest of his colleagues, but somehow you managed to release the quiet rage that Frazier had been holding in for decades.

That game would end up being your last in a Vikings uniform. Your time with the team was entertaining to say the least and provided Minnesota fans with plenty of opportunities to shout at the TV and celebrate after you made 9 players on the opposing defense miss a tackle before you ended up in the end zone.

However, it would be a lie to say that your time with the franchise did not come without a few headaches.