What Should the Vikings Do With Their First Selection of the 2016 Draft? 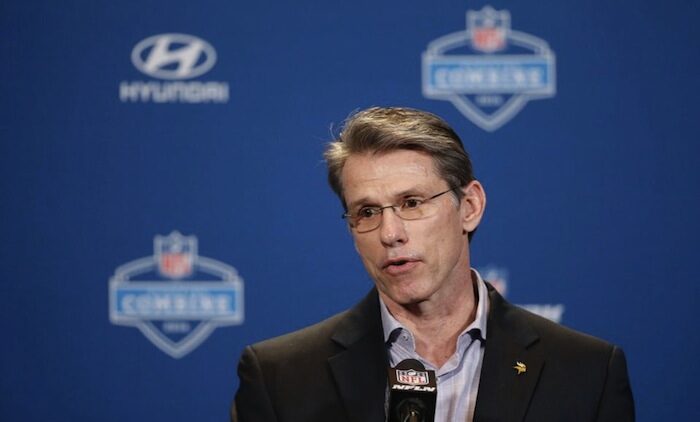 At least now the league’s annual event is less than one month away from taking place. Soon enough, each team will do their best at selecting the right players to add to their roster and then the Cleveland Browns will end the careers of a new set of rookies.

Unlike the New England Patriots, the Minnesota Vikings have not made an enemy of NFL Commissioner Roger Goodell and are going to be allowed to keep their first round selection in this year’s draft. With their very first draft pick in 2016, will the Vikings keep it boring or will they use the selection to become the talk of the league after the draft’s opening night?

Almost every mock draft that has been published up until now has envisioned the Vikings taking a wide receiver in the first round. But do they really need one?

Was the lack of wide receiver production in 2015 a result of bad pass protection or even poor play calling? Would it not be a better idea for Minnesota to draft an offensive lineman to improve the unit and see what the Vikings receivers can do when they have more than half a second to get open?

Look at the Patriots. In the last 14 seasons, New England’s passing offense has not ranked lower than 12th in the league in terms of total passing yardage.

The Patriots offensive line gave up an average of only 27 sacks during that time span. That total number of sacks allowed would have been the 4th least amount given up by a team in 2015.

It may be in Minnesota’s best interest to continue their efforts in building a successful offensive line this offseason and perhaps worry about their “need” for a receiver next year.

The Vikings could shock the league by selecting a running back with their first selection, but the crop of running backs available in this year’s draft class says that Minnesota would be better off filling a different need. Vikings running back Adrian Peterson is now 31-years-old, but drafting his future replacement in the first round seems unlikely this year.

Mike Zimmer has been Minnesota’s head coach for the past two seasons and in each of the last two drafts, the Vikings have selected a defensive player in the first round. So even though all of the “experts” have Minnesota taking an offensive player with their first pick, it should not come as a shock if the team chooses to use the pick to add another player to their defense.

There is one safety that has been consistently been given a first round grade by various media outlets and that is Florida State’s Jalen Ramsey. He is regarded as one of the best players available in the entire draft which would make it highly unlikely that he would last all the way to 23 for the Vikings.

Other than Ramsey, there are really no other safeties available in this draft class that have been deemed worthy of a first round selection. If Minnesota is going to take a safety in this draft, it will likely come after the first round.

Now, drafting a linebacker rather than a safety in the first round seems like a much more plausible scenario for the Vikings. The top talent available this year in terms of linebackers makes it seem viable for there to be a few of them taken in the first round.

By selecting a linebacker in the first round of this year’s draft, it would be the third consecutive year in which Minnesota used a pick on a linebacker within the draft’s first two rounds. If Minnesota opts to not select a linebacker with the 23rd selection, they could always just draft the best player available on defense.

When it comes to the best player on offense or defense being available, Zimmer is more than likely going to make sure the Vikings choose the player who plays on the defensive side of the ball.

In having a general manager like Rick Spielman, Minnesota will always be a candidate to make a trade in the first round of the draft. In three of the past four years, the Vikings have come home with multiple first round draft selections thanks to the wizardry of Spielman.

In the last four drafts, Spielman has not been shy about making a trade with another team. His work has resulted in more than 15 trades involving more than 39 draft picks and five players.

This year seems like it would be a prime opportunity for Spielman to add another transaction to his trade total. Based on where Minnesota is slotted in the first round, their position could become very valuable to another team looking to move up or back into the first round.

If Spielman and the Vikings do decide to trade the 23rd pick to another team, do not expect them to remain out of the first round if that is the outcome of the trade. Since all first round draft selections come with contracts that include a team option for a fifth year, Spielman would more than likely make sure Minnesota trades back into the first round even if it is the very last pick.