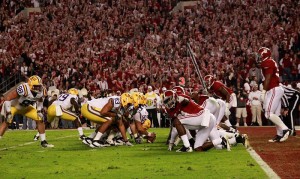 The NFL Draft: the consistent, inescapable exercise of trying to predict the future. Determining how college kids will react to becoming overnight millionaires and being thrust into foreign locker rooms with men a decade their senior who will probably haze and/or ostracize them for a month or two. The psychological part alone is enough to make it a crapshoot—forget everything else.

But, hard as it may be to accurately foresee who will excel at the next level, that of course won’t stop NFL teams—or us—from trying. The Vikings will continue to do their due diligence leading up to next month’s draft, but in the meantime, I like to look at trends when it comes to which players succeed and which don’t. Lately, it’s been the correlation with college conferences I’ve been focused on; mainly, how big is the difference between power five and mid-major conferences when it comes to developing top-tier NFL talent, and which conference produces the most “good” players?

So, behold, a limited and unscientific, but hopefully somewhat enlightening study. I looked at the first round of every NFL draft in a ten-year span, from 2004-2013, and noted every player that had made at least one Pro Bowl, and which college conference that player came from. A few notes on the process:

Of course, not all of these conferences have the same number of member schools, so results could be skewed toward larger conferences. Let’s look at the average Pro Bowlers per member school:

Not a huge change, though we do see the SEC widen its lead slightly by nature of having 14 member schools to the ACC’s 15. Also, the Big 12—the smallest conference in the power five—moves ahead of the Big Ten and into third place. Thank you, Texas and Oklahoma.

What About the Mid-Majors?

Yeah. Not much happening here. I’ll admit, while I knew there would be a disparity between the big and little guys, I had no idea it would be THIS big. No more than four first round Pro Bowlers produced in a ten year span, and only once has a mid-major produced more than one in a given year (two, and that was in 2004). It shows just how dominant the power five football conferences are when it comes to recruiting and developing talent.

Another interesting note is which conference we don’t see in any of these tables: the Big East. The once-proud conference dissolved completely in 2013, and reformed as a non-football league shortly thereafter. Obviously, then, we don’t see any NFL players coming from the schools that make up the current Big East Conference, but it serves as a glimpse of the toll conference realignment has taken, given this was once the home of Miami, Virginia Tech, and West Virginia, among others.