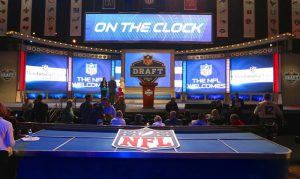 It’s draft week, and as we march gleefully toward the first round on Thursday evening, most of us have an opinion on what the Vikings should do with pick number 23. As I’ve been compiling mock draft roundups and reading a wide spectrum of theories and viewpoints, certain “conventional draft wisdoms” keep popping up. Some of them valid—Mike Zimmer likes lanky, fast defensive players, for example—some of them less so. And these less valid conventional wisdoms can often morph into draft myths, repeated year after year and anointed as NFL Draft gospel, despite their questionable legitimacy. Here are three of those myths, and the truth for each one:

The Truth: This is far and away the greatest NFL Draft myth: a good GM will select the best player available when his team picks in the first round, regardless of position or other considerations. It is repeated far and wide by anyone and everyone in NFL front offices, sprayed in the direction of reporters at draft-related press conferences, and leaned on as a crutch when team officials (understandably) try to avoid giving any real information on what the team might do on draft day. “Best player available,” they say with a shrug, because why would a competent personnel director do anything other than get the best possible talent for his team?

In reality, there is some truth to the best player available cliché, but the honest mantra of teams on draft night would have an addendum: best player available at a position of need. The Vikings will not draft a quarterback in the first round. Neither will the Buccaneers or the Titans; no matter which player is at the top of their board when its their turn to pick, a team committed to a young, promising signal-caller will not draft another one in the first round. Nor should they—doing so could cause a host of chemistry issues and, quite possibly, amount to a wasted pick, no matter how good the incoming rookie is. You only play one quarterback, and while each team needs a competent backup, the first round is not where you go looking for those.

Furthermore, the Rams and Eagles didn’t trade up to number one and number two to select Laremy Tunsil and Jalen Ramsey. They did it to take quarterbacks. Not because Jared Goff and Carson Wentz are the two best players in the draft—they aren’t. They’re the two best players at a position of need for the Rams and Eagles. It also happens to be the most important position in sports, but that’s for another day.

A lot of mocks have the Saints going defense in the first round, and they probably will. The Titans have a good chance to take an offensive tackle. The overwhelming majority of draft sites think the Vikings will draft a receiver at 23. What do these all have in common? Need. To say teams don’t consider it is naïve, and for a team to actually not take need into account would be foolish. What if the best player available happens to be a wide receiver every year? Would anyone in their right mind continue taking receivers in the first round, year after year, when there are other glaring needs? Of course not. (Well, the Lions did it once… but hey, my point exactly.)

GMs will keep droning on about “best player available,” because they’re supposed to. But the truth is, whether the need is for a starter, for depth, or just for future considerations, there is a need component to every selection in the first round.

Myth 2: We need a red zone target, so we need a big receiver.

The Truth: Conventional wisdom says good red zone receivers are big, tall, long, or a combination of the three. Often times, they are—Rob Gronkowski was tied for second in red zone receptions last season. But the player he was tied with? 5’10”, 180-lb Antonio Brown.

Okay, Antonio Brown is an outlier, and had an otherworldly 2015 season. True. But of the top 11 players in red zone catches last season, four of them were 6’1” or under. This includes Julian Edelman—tied for sixth in the league with 12 red zone receptions, and generously listed as 6’0”. Randall Cobb (5’10”) had 11 red zone catches last year. Cole Beasley (5’8”) had 10. And so on.

The point? The majority of top red zone receivers are big, tall players, but they don’t dominate the category; rather, the margin is smaller than you’d think. There is room for smaller receivers to have success in the red zone given they have the right skill set.

In this year’s draft, the parallel is Baylor’s Corey Coleman, who is listed at under six feet but described by NFL.com as a “touchdown maker” and an “explosive leaper with ability to climb ladder and win the 50/50 ball.” In the first round, we generally think of Doctson and Treadwell as the red zone guys, but we may be overlooking Coleman in that regard. Food for thought.

Myth 3: Trade up to get the player you want.

The Truth: This is less Vikings-related, because frankly, no one’s suggesting they move up in this year’s first round. But it has become relevant again this year after the Rams and Eagles both made blockbuster trades to move up to picks number one and two. They’re both trying to land a franchise quarterback, which, as I mentioned earlier, is the most important position in sports, so giving up a few extra draft picks for the opportunity to draft one seems like a winning proposition, right?

Wrong. The data examining first round trades are alarmingly lopsided, and point to a single conclusion: it rarely works. NFL.com looked at the 10 instances in the past 10 years of teams moving up in round one to select a quarterback, and of those 10, only two are still starting for the team that selected them: Joe Flacco and (cue the party guns and confetti) Teddy Bridgewater. Other players on the list include Tim Tebow, Johnny Manziel, Mark Sanchez, Brady Quinn, and a few more underwhelming names. Outside of Flacco and Bridgewater, only one quarterback from the group—Jay Cutler—has seen sustained success in his career.

And it doesn’t end with the quarterbacks. Last April, Sports Illustrated’s Will Laws looked 74 first round trades in the previous 12 years and the 287 draft picks that changed hands in those deals. The results clearly favored the teams that chose to trade down. For the teams that moved up, the 74 trades in question produced a net loss of 2,348 starts—or 31.7 lost starts per trade. This doesn’t tell the complete story, only aggregate statistics, but those stats reveal that more often than not, it pays to trade down, not up.