The Versatility Of Sheldon Day 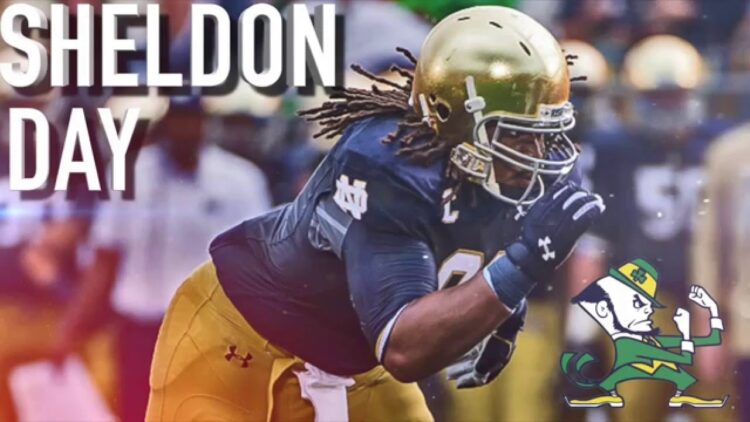 Sheldon Day returned to Notre Dame for his senior season in 2015 to improve his craft as a disruptive interior force and build upon his leadership skills as a two-time team captain. He wrapped up his college career in fine fashion finishing the year with a Pro Football Focus grade second only to DeForest Buckner among interior lineman. Day is an intriguing prospect that some mock drafts have the Vikings targeting in the mid-rounds.

At 6’1” 296 pounds, Day has been labeled as “undersized” for the NFL. One could even say he is underrated and unappreciated in a draft class loaded with outstanding defensive line talent. Nonetheless, there is no denying that the USA Today first-team All-American is one of the safest and most versatile players in the 2016 NFL Draft.

Where Day lacks in size he more than makes up for with his explosive quickness off the snap and violent hands. He has a non-stop motor with the athleticism to elude blockers with his great lateral movement. Day’s outstanding quickness has most analysts projecting him as an excellent interior pass rusher at the next level. His burst, impressive agility, great closing speed and his relentless attacking effort is certainly fun to watch.

When I spoke with Day on the phone this week, he was quick to tell me he is more than just a pass rusher.

[quote_center]“I’m above average in run support,” Day said. “I can penetrate gaps and pursue the ball.”[/quote_center]

He models his game after Aaron Donald, another undersized interior defender who was drafted by the Los Angeles Rams in the first round of the 2014 NFL Draft. Day is not the first-round prospect Donald was, but similarly flashes natural leverage and disruptiveness as a gap penetrator against the run or the pass. Like Donald, Day is also tough and competitive with terrific personal and football character. Day would fit nicely as a rotational, complementary, havoc-weaking three-technique lineman in Mike Zimmer’s fast flowing 4-3 scheme.

When I asked Day what his thoughts were about playing for the Vikings and possibly joining former Notre Dame players Kyle Rudolph and Harrison Smith in Minnesota, he had this to say.

[quote_center]“That would be great. It would be really nice to be reunited with those two. They are great guys and it would be like family away from home.”[/quote_center]

Day told me the Vikings haven’t shown much interest in him and he hasn’t had the opportunity to meet any of the Vikings’ coaching staff. That’s okay, because he knows the Vikings didn’t show interest in Harrison Smith in the months prior to the 2012 draft either. Day has kept an eye on Zimmer’s attacking defense and thinks his speed would be a good fit with the Vikings.

[quote_center]“Kapron was drafted by the Ravens in the sixth-round in 2013,” Day said. “I looked up to his leadership and his ability to make a team better and that’s what I want to take with me.”[/quote_center]

Day’s leadership is a plus, but Zimmer will also be interested in his versatility as well. Day played both the one-technique and three-technique spots along the defensive front for the Irish last season. He also logged snaps as a defensive end in 3-4 and 4-3 looks. On occasion he also lined-up in a two-point stance and dropped into shallow pass coverage.

[quote_center]“The combine was a very good opportunity for me to meet and compete with the best players in the country. It was a great experience,” Day said.[/quote_center]

Day will be watching the draft with his family this weekend and he admits that he has no idea where or what round he might go. It might take a defensive mastermind like coach Zimmer to identify Day’s best scheme fit and the foresight to utilize him in a variety of ways.