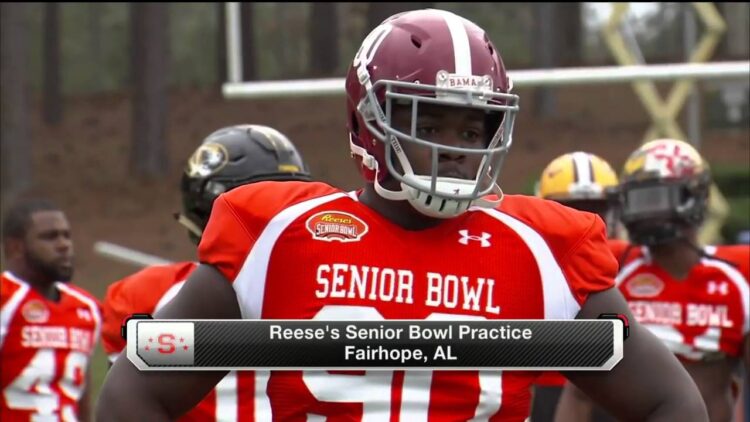 The Senior Bowl in Mobile, Alabama is one of the biggest events of the NFL draft season showcasing the best senior NFL draft prospects. This week’s practice and preparation leading to Saturday’s 2:30 pm ET kickoff was well represented by hundreds of scouts from across the country. While splashy skill position players like North Dakota State QB Carson Wentz and Ohio State WR Braxton Miller grabbed headlines for the North squad, it was Eastern Kentucky DE Noah Spence and Louisville DT Sheldon Rankins on the other side of the ball who created a buzz for the South.

A great week of practice in front of scouts is the best way for a player to boost their stock, but making plays in the game is also a good way to get notice and move up draft boards.

Based on the Vikings three primary positional needs, here is a list (in no particular order) of prospects to watch in todays all-star game.

Miles Killebrew #25 North, Southern Utah 6’2” 219
One of the most physically impressive players at weigh-ins. Great hitter in run support.

Darian Thompson #4 North, Boise State 6’2’ 215
Had a great week of practice. A ballhawking center fielder who can also attack against the run.

Jalen Mills #28 South, LSU 6’1″ 194
Four year starter who can play safety or corner. Shows good position and balance to get his hands on passes downfield.

Spencer Drango #58 South, Baylor 6’6” 320
Measured in with the longest arms of any player. 48 starts at left tackle but could move inside.

Joe Haeg #59 North, North Dakota State 6’6” 307
Small school standout who is a good enough athlete to develop into a starter at left tackle.

Malcomb Mitchell #86 South, Georgia 6’1” 196
Made a nice one handed catch on the first day of practice and is earning great reviews.