VT QOTW: Where Do the Vikings, Loadholt Go? 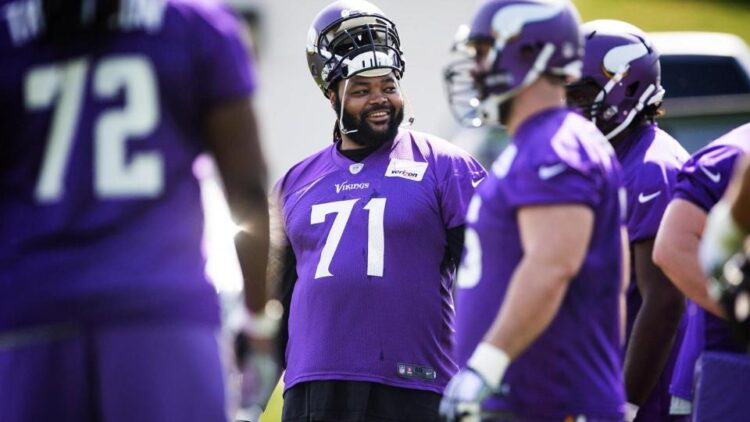 Fans of the Minnesota Vikings collectively gasped when Phil Loadholt tore his achilles against the Tampa Bay Buccaneers in the preseason. Considered one of the team’s best offensive linemen, Loadholt has been an integral piece in the success of the offense, especially as a run blocker for Adrian Peterson.

His loss opened the door for right tackle T.J. Clemmings, whose rookie season was nothing short of a struggle. The fourth-round pick was a liability in pass protection, and offensive coordinator Norv Turner often shifted tight end and running back protection his way. With the news that Loadholt’s recovery is on track and he’ll be ready for offseason workouts, the Vikings will have to make a tough choice when deciding who starts at right tackle next year.

With a lengthy injury history, the 30 year-old Loadholt is a potential risk if the Vikings do bring him back next season. His cap number will be $7.75 million in 2016, and his status for training camp is still up in the air. If Loadholt does recover and wants to continue playing football, general manager Rick Spielman has four legitimate options:

Seeing as Loadholt’s situation will be a topic of discussion among Vikings fans, I decided to ask the VT Team a right tackle-centric question this week: What should the Vikings do with Phil Loadholt next season?

I wouldn’t be at all surprised to see Phil Loadholt get the Antoine Winfield treatment. As sad as it is to say that, age and price could very well bring Loadholt’s long stay in Minnesota to an end. Rick Spielman has invested very considerable money into four starting spots on the offensive line, and yet, it was last season’s weakest link. With that huge frame just not holding up anymore, Loadholt makes the most sense to part ways with, especially if the money saved can be used to retain the likes of Mike Harris.

Vikings fans know all too well the struggles of the offensive line in 2015 without Loadholt and fellow starter John Sullivan. I think the return of Sullivan—one of the better centers in the NFL—will alone bring stability to the unit, but they need help elsewhere, too. Loadholt has made a career as a solid, if unspectacular, right tackle, who can be a road grader in the run game and hold his own in pass protection. With the Vikings about $20 million under the cap (and unlikely to go bonanza in free agency), paying Loadholt’s salary doesn’t hurt much financially. I say insert him back in the starting lineup and let him prove he either can or can’t do the job anymore. Best case scenario, he returns to pre-injury form and Clemmings is used as the backup at both tackle positions, where he is probably better suited. Worst case, he isn’t fit to be a starter and adds offensive line depth in the final year of his deal.

Financial decisions will dictate whether or not Loadholt returns. He is due $5.4 million in non-guaranteed money. Zimmer wants competition and Loadholt hasn’t played a game since November 23, 2014, when he suffered a torn pectoral muscle and a torn achilles tendon. Zimmer will not just hand the job over to Loadholt. A restructured deal for Loadholt (if cap space is an issue) and an open competition for the right tackle position is the direction I would go. Zimmer wants competition and I’m all for that.

To me, Loadholt’s time in Minnesota should be over. Two years in a row with season ending injuries and a body that’s not getting any younger does not help his chance at making this team next season — especially given the type of injury that kept him out this year.

A torn Achilles is an injury that many struggle to come back from. Many also have a hard time doing many of the things they did before the injury. Plus, it is not like the Vikings’ offensive line was amazing, even when Loadholt was able to play. For a unit that has given up 40 or more sacks in each of the last four years, Loadholt could also be joined by a few more current Minnesota offensive linemen, as the Vikings will look to improve their pass and run blocking this offseason.

With the offensive line issues the Vikings had in 2015, I think they  need to keep Loadholt as the starter for 2016. That said, they also need to bring in some help via free agency or the draft, just in case Big Phil isn’t the same player he was before the injury. Coming off an injury at the age of 30 is a risky move, but I think it is worth it to at least see what he has to bring to the table. With the shape the Vikings line is in, it would be extremly painful for the Vikings to let him go and watch him play at a high level on another team.

I’m answering this under the assumption he will be ready to go, and be able to start all 16 games. If that is indeed the case, then I think the Vikings should go ahead and insert him as the starter at right tackle.  Loadholt is by no means a perfect player, as he often struggles in pass protection, doesn’t always fire out of his stance, and is a magnet for yellow flags. But he is still an exceptional road grading run blocker and an upgrade over TJ Clemmings. This also would allow the Vikings to try T.J. Clemmings out at guard, where he could battle either Mike Harris or Brandon Fusco for a starting job, depending on which side the team tries him on.

So a healthy Loadholt potentially upgrades two positions on the Vikings’ offensive line. It also gives them the option to use that first round pick at a position like WR, OLB, or S. The team also knows what it has in Loadholt, as opposed to bringing in an unproven rookie who may or may not be able to handle NFL pass rushers. Loadholt is in the last year of his contract. so he has some extra motivation to play his best football yet. The Vikings are a team that is ready to make a serious run at the Super Bowl, and having an experienced veteran like Loadholt at right tackle could be a move that helps them actually get there.

I’m of the unpopular opinion that T.J. Clemmings is the starting right tackle, and should be in 2016 and beyond. Despite his struggles, he started all 16 games for the Vikings last year and has the potential to be a solid player for the Vikings. With his relative youth and the ability to develop, he’s the smart (and inexpensive option) for Rick Spielman moving forward. Loadholt, meanwhile is coming off another brutal injury and will likely need time to “catch up” as a 30 year-old right tackle. Unless the Vikings decide to restructure Loadholt’s contract this offseason, his $7.75 million cap hit in 2016 is too grand to justify bringing him back. Clemmings will struggle, as young tackles do, but patience is a virtue in the NFL. Give the rookie a break.