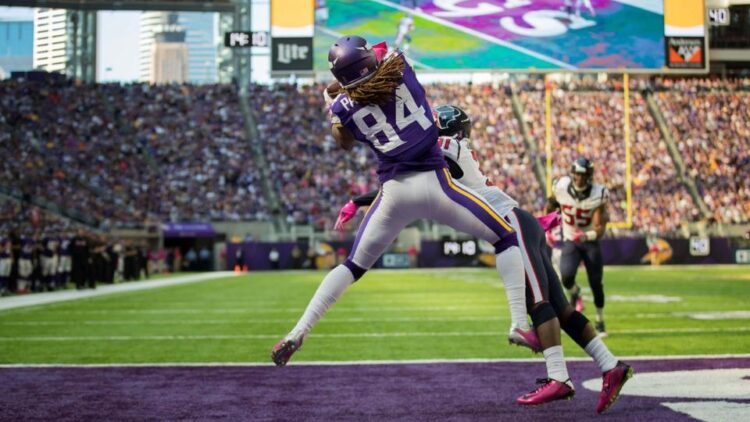 Adam Thielen and Cordarrelle Patterson each caught touchdown passes to help the Vikings cruise to a 31-13 victory over the Houston Texans. With leading receiver Stefon Diggs out with a groin injury, Thielen hauled in seven passes for a career-high 127 yards and Patterson looked impressive even as a true red zone target.

Through five weeks the Vikings have scored seven touchdowns on 13 red zone opportunities. With a red zone efficiency percentage of 54.85 percent on the season, the Vikings currently rank 18th in the NFL in that category.

The Texans only ran four offensive plays in the red zone (three passes and one run) on two possessions and scored one touchdown and one field goal.

The Vikings reached the red zone first mid way through quarter one as Asiata powered up the middle for a 1-yard touchdown run to give the Vikings a 14-0 lead. McKinnon hasn’t set the world on fire in the red zone, but his 8-yard run on first down from the 10 yard line helped set up Asiata for the short punch-in.

Blair Walsh added a 19-yard red zone field goal to give the Vikings a 17-0 advantage early in the second quarter. The 11 play drive unfortunately stalled on the 1-yard line despite a great effort by Patterson who took a bubble screen 15-yards but lunged just short of the goal line.

With under two minutes to play in the first half and the Vikings up 24-3, the Texans got their first red zone opportunity. The Vikings defense rose to the occasion forcing three incomplete pass attempts as the Texans settled for a 30-yard field goal. Brock Osweiler finished 19 of 42 for 184 yards and one interception and looked uncomfortable the entire game against a relentless Vikings’ defense.

Sam Bradford connected with Patterson on a 9-yard touchdown pass early in the fourth quarter to give the Vikings a commanding 31-6 lead. Patterson’s outstanding leap and pluck of the ball over tight coverage in the corner of the end zone earns my Red Zone Play of the Game award. Patterson has made the most of his recent extended playing time and on Sunday he certainly looked the part of a legitimate red zone threat that the Vikings should continue to target.