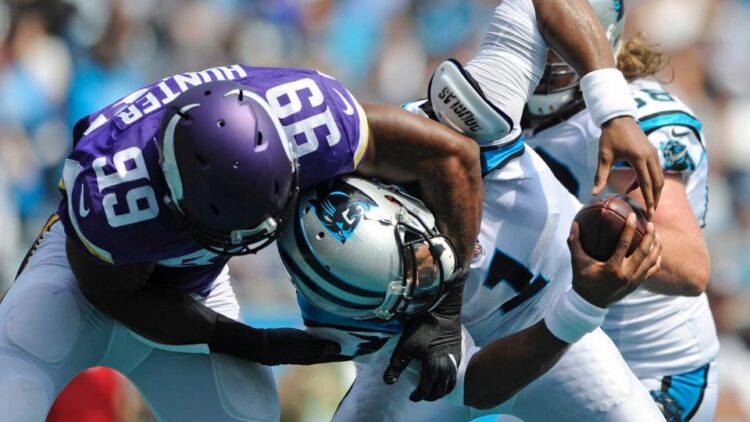 Since Mike Zimmer became the coach of the Vikings, the team has played the Panthers twice, and in those games, Cam Newton is a combined 39 of 70 for 456 yards, with one passing touchdown and four interceptions. You can clearly see the impact Zimmer’s schemes and gameplans have on the 2015 MVP, and on Sunday, the Vikings stifled Newton in a way that few defenses can (21/35, 262 YDS, 0 TD, 3 INT). They also sacked him eight times. It was, quite simply, a magnificent performance, especially considering how prolific the Panthers’ offense usually is at home.

Chad Greenway had an interesting quote after the game.

“It’s 90 percent coaching,’’ Greenway said, according to the Star Tribune. “They’re putting us in the right positions. And we have good players who are making the plays.’’

Some defenses are well-coached, and some have upper-echelon talent. When you combine the two, magical things can happen. The Vikings defense can be—and maybe already is—the best in the league. They’re without a doubt in the top three. Minnesota is 3-0 largely due to Zimmer’s scheme and the standout play of the defense.

Last week, we Vikings fans had one of our patented “poor us” moments as we watched Adrian Peterson, Matt Kalil, and Sharrif Floyd all go out for the season (or most of the season, depending how things go, or something) in quick succession. Here we were, feeling happy and optimistic after the team had overcome the Bridgewater injury (and, to a lesser degree, Xavier Rhodes’ ailment) and win its first two games. Then, three starters, including a former MVP, were suddenly headed for the surgery table. We shook our collective fists at the sky.

But, at least for one game, those injuries didn’t have a catastrophic effect—or even a significant one—on the Vikings. TJ Clemmings filled in well at left tackle, the running game was actually slightly better (which, admittedly, isn’t saying much) without Peterson, and the depth at defensive tackle masked the loss of Floyd.

Then, during the game, Alex Boone injured his hip and was replaced by Jeremiah Sirles, a human being with whom I was unfamiliar before Sunday. When Sirles trotted out on the field, it seemed as though this would be the final blow to a battered offensive front that had not played particularly well up until that point in the game. Instead, the offensive line play improved almost immediately. In the second half, with the left side of the line manned by two backups, the blocking was the best it has been all season. You figure it out.

The Marcus Sherels punt return touchdown gets the headlines, and it was a turning point in the game, but was only one part of a well-rounded special teams effort. Jeff Locke shook of some very valid criticisms and averaged 48 yards per punt, pinning Carolina inside the 20-yard-line three times. The punt team’s coverage was phenomenal all day, and all phases of special teams contributed to the win. Going forward, dominant defense paired with airtight special teams can mask a lot of deficiencies on offense.

And Blair was two for two on field goals! Nice game for him. Except…

It didn’t affect the outcome, but this is now a legitimate concern and a sneaky point of anxiety going forward. It just seems like one of those things that will rear its head at the worst time, and probably contribute in some way to the ending of the 2016 Vikings season. Fatalistic, I know. Walsh is now seven for nine on field goals this year, but has missed two extra points. Two PAT misses in three games is a trend, not a fluke. You can live with some field goal misses, but you cannot have your kicker regularly missing extra points. And there’s no real course of action; this is one of those things we just have to hope goes away.

It was cool to see Cordarrelle Patterson play the gunner position on the punt team—for one, it’s another example of Mike Priefer creatively using the team’s talent on special teams. Two, it’s nice to see Patterson put the ego aside and play one of the less glamorous positions.

Three, he was good at it. Patterson’s speed and athleticism made him look like a natural, and he had one highlight tackle and also downed a punt at the two-yard-line. I hope we see more of this.

In other news, we still have yet to see Patterson make any sort of play without celebrating as if he just won the Super Bowl. We shall continue to wait.

It always makes me warm and fuzzy when the unbiased nation media take notice and say nice things about the Vikings, so I’ll leave you with this. Love you, Rich.

Three weeks in and there's a clear top team in the NFC: @Vikings