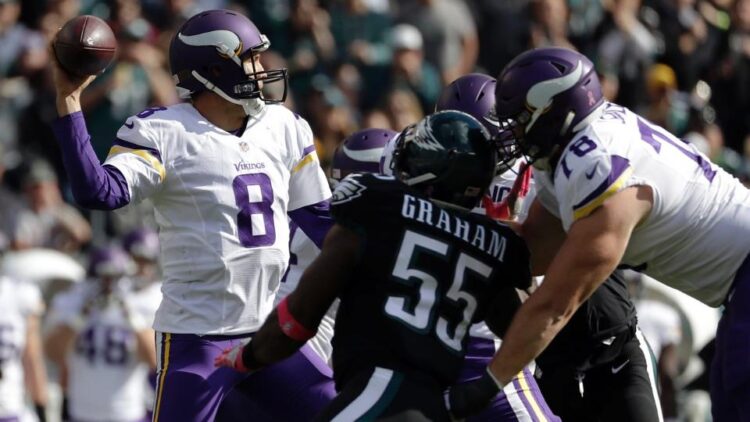 In two of the three phases of the game—offense and special teams—the Vikings were somewhere between “lacking” and “unmitigated disaster.” The normally sound special teams units were uncharacteristically bad; the kickoff coverage unit left a gaping hole for Philadelphia returner Josh Huff, who returned it for the Eagles first touchdown, and Marcus Sherels lost a fumble on a punt return. On offense, the Vikings turned the ball over three times and got just seven points on four trips to the red zone, plus a 48-yard field goal from Blair Walsh. The offensive line was a factor in all three offensive turnovers, and played its worst game of the season, which is saying something. Sam Bradford wasn’t good, either; he missed a number of throws he usually makes, but it’s hard to put too much of the blame on his shoulders considering there was at least one defender in his face at all times.

For at least one week, the addition of Jake Long did nothing, and the offensive line went from liability to train wreck—even Mike Zimmer placed most of the blame for the loss on the blocking, saying, “We didn’t block anybody. We were soft. We got overpowered.”

Zimmer to offensive line in locker room: "This is your fault."

There are plenty of fingers to point for this one, but the offensive line hamstrung the offense’s ability to move the ball or score all game. It’s nearly impossible for the skill positions to do their job when you don’t block the guys up front. They simply have to be better.

The Vikings defense only gave up 13 points and forced four turnovers of their own. They held the much-ballyhooed rookie quarterback to 57% completions, 138 yards, one touchdown, and two interceptions—paltry numbers. The defense was not the reason for the loss. However…

3. They didn’t get much pressure on Wentz.

The Vikings didn’t record a single sack in the game, and beyond that, they weren’t able to hit or hurry Carson Wentz as much as I expected. Yes, teams are employing a lot of quick drops and dump-offs to get the ball out of the quarterback’s hands against Minnesota, and the Eagles did a fair amount of this, but there were too many times Wentz was able to stand in a clean pocket and go through his progression. This is one of the more concerning things to come out of the game—we knew the offensive line was bad and the Vikings offense would have a turnover regression at some point, and they finally did. But the Eagles are dealing with O-line issues of their own, and to not be able to hit the quarterback more with this fearsome defensive front is troubling. It’ll be worth monitoring whether or not Zimmer decides to ratchet up the blitz in the future.

As a team, the Vikings averaged 3.4 yards per carry, significantly higher than their admittedly awful season average of 2.5. Once the team realized the pass game wasn’t working, they had no choice but to run the ball, and in the third and fourth quarters they were able to do it reasonably well. There were, of course, the consecutive runs on third-and-one and fourth-and-one inside the Eagles ten yard-line, which were both stuffed and resulted in a turnover on downs. This was the low point. But for much of the day, the Asiata/McKinnon combo was able to generate positive yardage, and that was an encouraging step.

With as ugly and depressing as the Vikings first loss was, we have to keep in mind the big picture: the team is 5-1 and atop the division. I hate to belabor this particular point, but if you had told me before the season the Vikings would be sitting at 5-1 after six games, I would have been pretty happy about that. We have a good team here, and a single dud doesn’t change that. Next week brings a primetime meeting with the Bears, just what the doctor ordered after a performance like this.