At 4-0, with what this team has been through, it’s hard not to let the joy flow hysterically, running down the street and high-fiving strangers and yelling about how football is a great sport and life is indeed fair. It’s been a heck of a start. The best thing I can say about the 2016 Vikings is they don’t seem like a Vikings team. This is a sincere endorsement and a point of admiration.

As Vikings fans, we’re always waiting for the other shoe to drop. No matter how good things look, we’ve been burned enough times to know that it will somehow end in agony, and thus it’s hard to fully enjoy even the best of times when we’re constantly looking over our collective shoulder. It’s a terrible way to live, but I’m hoping—hoping, gang—that this particular group will finally, mercifully, be different.

Take Sunday night against the Giants. It had all the makings of a classic out-of-nowhere letdown loss. The team had been borderline dominant en route to 3-0, and basically everyone was picking them to beat New York. The Vikings blew them out last year, the game was at home, and Mike Zimmer’s defense is a matchup nightmare for Eli Manning. Generally, they’d find a way to blow this one and bring us all back to earth, and that’s exactly what had me on edge before the game.

Going into the fourth quarter, the Vikings led 17-3, and, despite how well the defense played, I steadied myself for the inevitable: this was when most Vikings teams would begin their collapse. A quick touchdown, a three-and-out by the offense, and the game would proceed to slowly slip away until the opposing kicker hit a 60-yard field goal as time expired for the win, or something. And on cue, to open the fourth, Giants running back Paul Perkins took a screen pass 67-yards to the Vikings four yard-line, and the Giants punched it in. 17-10, and my blood pressure was reaching that unhealthy level that I like to call “here we go again.”

But then, something magnificent and wholly un-Vikings happened: the team responded. Sam Bradford led a clutch drive that included a beautifully thrown deep ball to Charles Johnson down the sideline, and culminated in a McKinnon rushing touchdown. The team again had a comfortable two-touchdown lead, and the defense didn’t give up another point, twice stopping the Giants on fourth down and sealing the win.

And that’s what was so great about this victory; there was an opportunity for a collapse to start, and they squashed it. They gave up one big play and rallied, and the strength of the team—the defense—brought it home. They looked…confident. They showed a killer instinct. They played like winners.

Even now, there’s an internal battle waging in my fan heart. On the one side, I’m still waiting for the other shoe to drop. I’m waiting for the heartbreak, and relatively certain it’ll happen somewhere down the road. History has told me it will. But on the other? Well, maybe this team is different. Maybe they won’t just disappoint us. Maybe Mike Zimmer—in his third year as the head coach—is the real deal. Not just “good coach” real deal (we already know that), but “great coach” real deal. Generational coach. Maybe he’s the guy to turn this thing around for good, and to end the decades of dropping shoes.

I know that’s a big hill to climb, and a lot to ask of one man. But if not Zimmer, who? And if not now, when?

I hope it’s that good side that wins out. And I know the odds say it won’t. So we’ll see what happens. But it’ll be a fun ride along the way.

2. The offensive line’s best game of the year?

I certainly think so. They looked good both run blocking and in pass protection, and that’s the first time I’ve thought that in the past four games. It was a complete effort by the whole line, highlighted by Alex Boone’s best game as a Viking; Boone had key blocks on both rushing touchdowns, and showed a good ability to pull on running plays. He finally looked like the player the team thought it was getting in free agency.

Jeremiah Sirles stepped in for an injured starter for the second straight game, this time at right tackle. Again he played well, and considering the season Andre Smith has had so far, I think most fans will be calling for him to start going forward. I am included in this group. At the very least, Sirles has earned playing time somewhere on the line.

The run game was a positive asset Monday night, and while McKinnon had a nice game, it was largely due to the improved offensive line play.

Larry Donnell got a concussion, so that part is not fun. But my goodness, Anthony Barr. So often he doesn’t make the splashy plays—the interceptions and sacks and, well, touchdowns—but it’s the little, non-stat things that make Barr such an important part of the defense. The downfield coverages and filling of gaps and the quarterback pressures to force incompletions. This one is a great example—absolutely blowing up a blocker and causing what should have been a tackle for loss.

He held Odell Beckham to a career low 23 yards. That is a feat that cannot be overstated. Yes, Rhodes had help a lot against Beckham, but he was tremendous in coverage and put himself on the elite cornerback map in front of a national audience.

My first ever post as a VT writer was an examination of whether or not Rhodes was a shutdown corner, and my conclusion was basically: no, not exactly, he’s good but he’s got some things to work on. He’s taken a big step forward since I wrote that post, and he just “shut down” one of the best receivers in the game. Bravo. 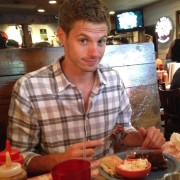 Worth pointing out that the guy Barr absolutely destroyed is 10lbs heavier than him. Barr is a tank.

try thinking about the weather

Too bad we screwed the pooch on that screen pass. Kendricks was late getting there, Sendejo took a horrible angle etc. Without that play we hold them to three points, maybe six. Kendricks seemed to have an off game. He missed four tackles. One was a TFL that he normally makes. He seemed to be out of position a couple of times and he dropped a sure INT that would have sealed the deal?? I hope this is just a fluke and not a sign of things to come..

I think this may be the best team the Viking’s organization has ever fielded and I said last year this team will go undefeated or 15-1. They just get better and better under Zimmer. He knows his players well. Coach of the Year. Yeah, I had the same feeling the moment it became a 7 point game, but they proved that’s the difference between this team and any other Viking team in recent memory. I’ve got a feeling Bradford is going to make it through the season and AP’s return at the end will be dynamic.

Man, I’m really hoping this doesn’t turn out like our previous great teams. “I know we’ve never won in the past but we’re finally going to do it! Oh… interception…”. That being said I’ll be there screaming my head off until that stomach punch I never saw coming happens.

Just remembered that Anne Murray song “Blessed are the Believers”. Seems to fit us well. And yes, I am an Anne Murray fan:)