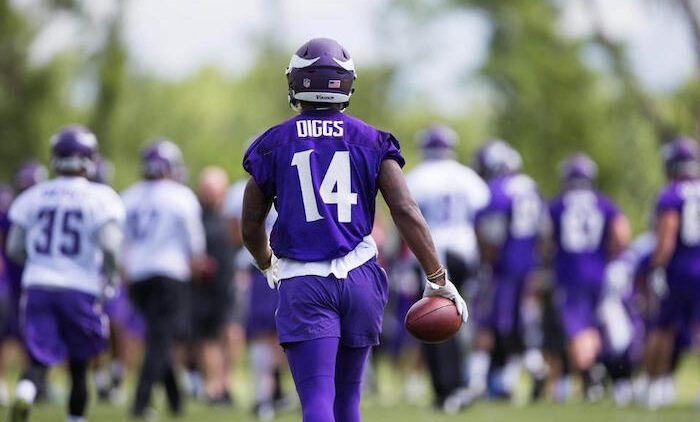 All four of these players are some of the best wide receivers in the NFL and all four averaged less yards per reception than Minnesota Vikings wide receiver Stefon Diggs in 2015.

Hard to believe that Diggs was not even active for the Vikings first three games of last season. A Week 3 injury to fellow Minnesota receiver Charles Johnson propelled Diggs into the team’s lineup and he never gave up the spot for the remainder of the season.

Four weeks after playing his first snap for the Vikings, Diggs had already racked up 25 catches for 419 yards and two touchdowns. In the first four games of his own rookie season, former Minnesota wide receiver Randy Moss caught 17 passes for 273 yards and four touchdowns.

Opposing teams began to take notice of Diggs abilities and soon the rookie receiver was lining up across from some of the league’s best cornerbacks. With the extra attention, his production cooled down during the second half of last season but still managed to have one of the best years among the NFL’s group of rookie wide receivers in 2015.

With the Vikings selecting wide receiver Laquon Treadwell in the 2016 NFL Draft, Minnesota is hoping that their newest receiver will take some of the attention from opposing teams away from the blossoming Diggs for next season. If all goes well, Diggs could have a season similar to the second seasons of some of today’s top NFL receivers.

The second season has become the defining season for many of the best receivers in the league today. All of the receivers included in the table below saw a significant increase in their production on the field during their second year in the NFL.

Diggs rookie statistics are comparable to the numbers that each of these receivers put up in their inaugural seasons. In his second season, will his production continue to trend upward and remain on the path taken previously by today’s elite receivers?

A large factor that could play a part in Diggs achieving similar success to the receivers mentioned above could be the amount of balls to go around in Minnesota’s offense. For a team that attempted the least amount of passes just a season ago, the addition of Treadwell could actually take away more potential opportunities for Diggs to make plays with the football.

Whatever type of offense the Vikings decide to run next year they can likely be assured of one thing. Diggs is going to continue to turn heads around the league with his playmaking abilities every time he touches the ball in 2016.