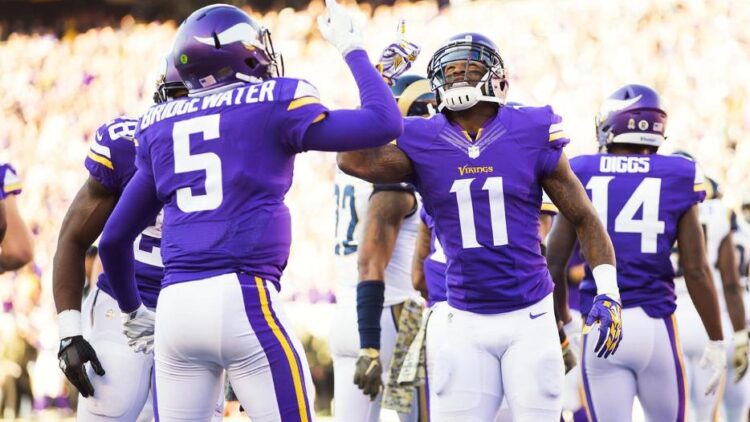 Minnesota Vikings GM Rick Spielman took the podium for his annual press conference at the NFL Scouting Combine on Wednesday. In his opening statement he talked about the great job Mike Zimmer has done turning this team around and his ability each season to build on that success. Spielman identified that the development of younger players, the culture that has been established in the locker room, and the emphasis that the team comes first are the key elements to the Vikings success. One veteran leader that Spielman singled out was Mike Wallace.

[pull_quote_center]“What Mike Wallace brought into our locker room, his buy-in and his sacrifice from a standpoint of stats and what is best for the team – and I know coach Zimmer mentioned it in his post-season press conference – but he was a true professional and everything he was asked to do he did to the best of his ability. His leadership was very key to the success we had on the field.”[/pull_quote_center]

In 2015, Wallace caught 39 passes on 72 targets. Those numbers are down from the previous two season when he averaged 70 receptions on 128 targets with the Miami Dolphins. The percentage is almost identical, just way fewer targets.

Wallace’s targets and production was down because he was working with a young quarterback in Teddy Bridgewater, an offense that was centered around a power running game featuring Adrian Peterson, and great play from rookie sensation Stefon Diggs who came on strong stealing precious targets.

Wallace handled it in stride, never complaining the entire season. With the Dolphins, however, Wallace complained often about his role in the offense and lack of talent around him.

Spielman and Zimmer both seem to be pleased with the leadership and locker room presence they are getting from Wallace. Does that vote of confidence mean more of the same in 2016, or could Bridgewater be ready to throw the ball around a little more?

[pull_quote_center]”I think just the biggest thing that you want to see is maybe him letting it loose a little more,” general manager Rick Spielman told reporters last week, via The Star-Tribune. “I don’t want to call him cautious, but he took very good care of the ball because we don’t want to turn the ball over. I don’t want to speak out of turn for the coaches, just letting it loose a little more, giving some guys a chance to make plays even though it may not look like it’s open. I think that comes with time, the more and more the quarterbacks are in the league.”[/pull_quote_center]

A seasoned Bridgewater, a stronger commitment to the passing game, and better pass protection could help Wallace see more targets this season. Sure, the new Mike Wallace is less of a headache in the locker room, but maybe more of the old “vocal” Mike Wallace might be exactly what is needed to push Bridgewater to a high level.

I’m not expecting major changes in offensive philosophy in 2016, but I do like the speed that Wallace and Diggs bring to the table. A few extra target their way on running situations would be a welcomed sight. Yes, Peterson always speaks his mind when he doesn’t get his carries, so maybe it’s time for Wallace to do a little more talking himself.

At the Combine press conference, Spielman also added that the Vikings have some talent at the wide receiver position, but like any position, they are always looking to upgrade anyway they can.

Spielman and coach Zimmer will be looking for clear and distinct traits that fit from a scheme standpoint. They will also be looking for specific character traits as they look to build additional chemistry in the locker room.

Could one of those schematic fits be a wide receiver with some length and a freakish catch radius to pair with the speed of Wallace and Diggs? Many of the top draft analyst at the Combine seem to think wide receiver is certainly on the Vikings radar.