All Aboard Mike Zimmer’s Viking Ship 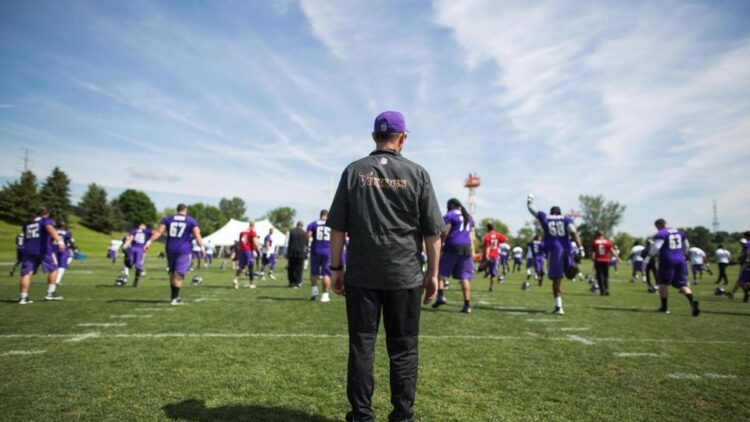 Firing a head coach in the NFL is like wielding a double-edged sword. With one swing, you can eliminate problems like poor game management or outdated defensive schemes. Or, you can catch the wrong side of the blade and fracture team chemistry, as the Vikings did when they parted ways with Leslie Frazier after the 2013 season.

Fans of the team rejoiced, but one player — Adrian Peterson — was reportedly frustrated with the team’s decision to fire Frazier. According to ESPN’s Ben Goessling, Peterson contemplated leaving the Vikings near the end of the season:

[quote_center]”I wasn’t happy. I wasn’t feeling good about being here in Minnesota at the end of last season,” Peterson said in a wide-ranging interview with ESPN. “Coaches change, but everything was shaken up.[/quote_center]

General manager Rick Spielman made sure to right the ship quickly, hiring Mike Zimmer as the Vikings’ newest head coach less than a month later. The move to bring in Zimmer — a no-nonsense, football-first mind — stabilized the franchise and rallied a young team to aim higher in 2015.

Under Zimmer’s leadership in 2014, the Vikings went 7-9 and succeeded in the face of multiple obstacles, including Adrian Peterson’s absence, Teddy Bridgewater’s rookie growing pains, and the implementation of a new defensive scheme. Unlike Tice, Childress, or Frazier before him, Zimmer has won over his players and quickly navigated the trials and tribulations that come with being a head coach in the National Football League.

While there’s room for improvement in year two, its safe to say Zimmer has established himself as the captain of the Vikings ship, and its time everybody climb aboard.

Before becoming a head coach, Zimmer spent 14 years as a defensive coordinator — seven with the Dallas Cowboys (00-06), one with the Atlanta Falcons (07), and six with the Cincinnati Bengals (08-13). A tenured, experienced coordinator, Zimmer had all the knowledge and skills to thrive as the top guy for any team, but lacked favor with executives and personnel men around the league.

During his introductory press conference, Zimmer expanded on his lengthy quest to become a head coach:

[quote_center]”I’ve got a chip on my shoulder,” Zimmer said, “and I want to make sure 31 other teams know I’m here to coach this football team.”[/quote_center]

That chip became heavier with each failed interview, as Zimmer was passed over year after year for open positions. That included the Tennessee Titans in 2014, who went on to hire Ken Wisenhunt after interviewing Zimmer for the same opening. The accepted belief was that Zimmer came across too brash, too cocky during interviews, souring teams’ opinions of the veteran coach. The experience with the Titans almost kept Zimmer out of Minnesota, per Mike Garafolo of Fox Sports:

[quote_box_center]”I almost didn’t go (on the second interview with Minnesota), yeah. I was so disappointed,” Zimmer, 57, who nabbed the Vikings job after that interview, told FOX Sports. “It was like, ‘Why even do this?’ It was to that point. I figured I was getting too old. I thought, ‘Forget this.'”[/quote_box_center]

Zimmer had interviewed once with the Vikings, but felt Tennessee was the right fit for him after meeting team officials the following day. His disappointment was understandable after missing countless opportunities with multiple teams, but I’d like to think Zimmer was meant to land in Minnesota with Rick Spielman, Norv Turner, and the rest of his superb coaching staff. When announcing the hiring last year, Spielman made it clear that the Vikings valued Zimmer’s tough attitude:

[quote_box_center]”The thing that stuck out to us the most was not only the passion, but the football intelligence and the leadership, and that’s something that we felt was very important going into this coaching search that we wanted to find. He has a great history of developing young talent; of taking veterans and having them even play beyond their ability. The other thing is we went through this search was talking to his former coaches, talking to former players, talking to agents who had players play for him. There was not one negative thing that was said about Mike Zimmer. The thing that stuck out the most was that he’s going to coach hard, he’s going to push us as hard as he can, but every person to a man said how much they love playing for Coach Zimmer.”[/quote_box_center]

Unlike 31 other franchises, Rick Spielman and his front office invested in Zimmer’s hard coaching and unbridled passion, putting their faith in the 57-year-old coach to revitalize their floundering team.

Zimmer did just that.

After the announcement, Mike Zimmer stood behind the podium in Winter Park and delivered a strong message:

In quoting Lombardi, Zimmer revealed his affinity for the coaching style of old; hands-on, critical, yet constructive. He described himself as “fiery on the field”, but “always honest” when coaching players up. Around the league, we’ve seen coaches like Joe Philbin and Marc Trestman lose locker rooms because of their softer approaches, making Zimmer’s style that much more refreshing.

Once the season started, fans immediately saw a difference in effort and performance from the team, particularly on defense. Under Leslie Frazier, the unit regularly lost leads and looked lethargic late in games. With Mike Zimmer on the sidelines, wind and consistent effort were never a problem, but an inability to finish still lingered.

A last-second loss to the Bills in Week 7 sticks out as THE perfect example of this, but other clunkers reveal room for improvement heading into the 2015 season. Remember the overtime victory against the Jets, a lesser team, in Week 14? The one where Jarius Wright took a screen pass 87 yards for the game-winning touchdown? Well, Zimmer wasn’t happy, calling the game “sloppy” and attributing the adversity to his own team. Looking at the schedule as a whole, the Vikings failed to beat a team with a winning record, and even worse, went 1-5 within in the division.

Zimmer will look back on those stats and cringe, but there’s A LOT to love from his rookie campaign, most notably his ability to get the most out of young players. Teddy Bridgewater won the Pepsi Rookie of the Year award, Xavier Rhodes blossomed into a legitimate No. 1 cornerback, and a handful of other players improved dramatically in 2014 — Sharrif Floyd, Harrison Smith, Anthony Barr, Jerick McKinnon, and the list goes on.

When he was hired, Vikings Twitter predicted this would happen, universally praising the move:

Really like the Zimmer hire. Smart choice by the Vikings.

Some credit due to Rick Spielman. Did not hire a "yes" man. He won't/can't mircomanage Mike Zimmer. #Vikings

Fired up about Coach Zimmer! As a Cincy kid he's been fun to watch there and can't wait to work with him! Welcome to the @Vikings!

The three examples are a tiny sample from an outpouring of support for Zimmer, which came from former Bengals players, fellow coaches, and a handful of national reporters. What stands out here is Seifert’s assessment that Spielman didn’t hire a “yes” man in Zimmer. If anything, he hired a coach who will challenge Spielman to draft particular players and build a roster suited to his scheme and coaching staff.

So far, so good in Minnesota.

In his season-ending press conference, Zimmer addressed the goal he had set before the start of the year — win the hearts of his players, per Brian Hall of Fox Sports:

[quote_center]”One of the things that I wanted to try and do when I came here was to try and change the culture as much as I possibly could. In a lot of ways it’s moving in that direction as far as developing the mindset. It’s developing the mental toughness, all the things really that I said in the first press conference I ever had.”[/quote_center]

One year in, and I’m confident in saying Zimmer has drastically changed the culture within the Vikings organization. One such example is Cordarrelle Patterson, the beleaguered first-round draft pick and potential superstar. He was expected to explode this last season, but regressed and eventually found the bench behind Charles Johnson. Zimmer’s firm hand kept Patterson under control, and he mandated the receiver improve this offseason through training and professional mentoring. If minicamp were any indication, Patterson has taken Zimmer’s instructions and attacked them wholeheartedly.

Another example, and probably the litmus test of Zimmer’s resolve, was his handling of the Adrian Peterson situation this offseason. Through the threats and rumors, Zimmer held his ground with Rick Spielman, refusing to give in to Peterson’s demands. He openly stated that Peterson would “play for the Vikings or play for no one” and used his strong relationship with the team’s best player to keep Peterson in Minnesota.

As training camp approaches, Zimmer has mended any old wounds with Peterson and appears to be comfortable in his role as the head coach of the Vikings. He has a young, talented roster, an excellent coaching staff, and the full support of the franchise. If he can improve his clock management and game management skills, he may have a chance to take this team far in 2015 and beyond.

Below, a few sound bites of Mike Zimmer “Wired for Sound” at Vikings minicamp last month:

[quote_center]”I feel very confident, though not satisfied, that we are heading in the right direction. The optimism heading into this offseason is totally different, and the expectation level with these guys.”[/quote_center]

Optimism is higher than it has been in years, and a lot of the credit goes to Mike Zimmer. Sure, the waters may be choppy and there may be obstacles at sea, but Zimmer’s the captain and this ship isn’t going down without a fight.