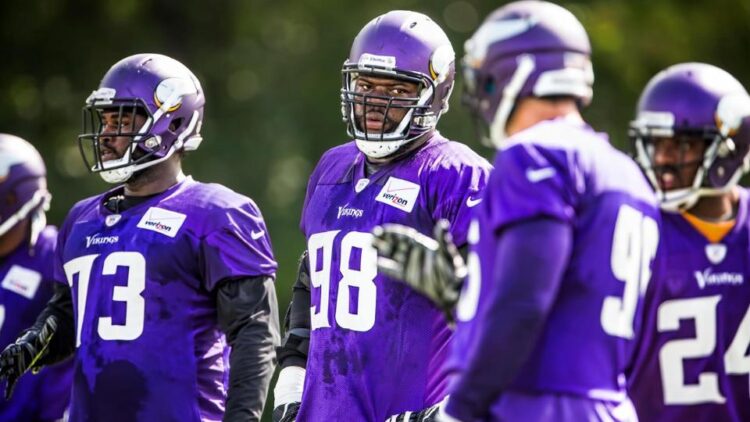 Despite a narrow loss to Denver Sunday, quite a few positives stood out for the Vikings in Week 4. One of those positives was nose tackle Linval Joseph.

Against the Broncos, Joseph finished the game with three run stops as well as a monster pass deflection. ESPN1500’s Andrew Krammer put together an interesting breakdown of the Vikings’ defensive performance Sunday, including a few images of Joseph’s plays, which you can view here.

Several Vikings fans took to Twitter to comment on Joseph’s noticeable performance against the Broncos, including our friends Luke Spinman and Austin Belisle:

This is the Linval Joseph you thought you were getting last year….

Linval Joseph is playing at another level for the #Vikings this year.

Fans aren’t the only ones noticing and commenting on Linval’s 2015 play, as head coach Mike Zimmer recently praised the veteran as well.

“One thing about [Linval] that I’m very impressed with—and I hope that our whole football team gets this mentality—is that he does an awful lot of dirty work that doesn’t show up in the stat book,” Zimmer said.

And while Joseph especially stood out with a handful of key plays in Week 4, his overall performance this season has been great for the Vikings—although he sometimes goes unrecognized. It’s easy to see those big hits by Harrison Smith or Anthony Barr’s interception, while the defensive lineman flies easily under the radar. Quietly, however, he’s making a big impact on Minnesota’ defense.

“I feel way more comfortable this year than I did last year in the system,” said Joseph. “I just want to do whatever it takes to make my team win.”

And that is exactly what he’s been doing.

Over four games, Joseph has rumbled for 12 total tackles, 10 of those credited to him as solo. In 2014, Joseph finished the season with 47 tackles but only 28 solo. And in the last two games, the Vikings’ defense held Detroit and San Diego to just 2.9 yards per carry, thanks in large part to Joseph’s ability to defend the opposing centers and, consequently, plug up the running game. Joseph said the following about his less-than-flashy role:

[pull_quote_center]Everybody got to do dirty work. You just look at the whole world. You got a trash man, he takes the trash out. Ain’t nobody want to do that job. Everybody’s job is important. I’m just glad i’m able to do this job, and do it great and help our team win.[/pull_quote_center]

This type of mindset is exactly what Zimmer wants from his team, and he sees Joseph demonstrating it daily. Being both a veteran player and someone who has a team-first mentality, Joseph has no problem playing a behind-the-scenes position that’s physically grueling.

At the end of the day, if he’s helping the Vikings find that “W” column, Joseph is happy.

“He makes plays, but he allows other guys to make plays […] he’s an unselfish warrior player,” Zimmer said of Joseph.

Joseph’s experience in the league lends itself to his performance now. Prior to joining the Vikings in 2014, Joseph spent four seasons with the Giants, originally drafted No. 46 overall in the 2010 NFL Draft. In 2010 and 2013, New York’s defense ranked in the NFL’s top 10. In addition, Joseph earned a Super Bowl ring with the Giants following the 2011 season.

In January 2014, ESPN’s Dan Graziano referred to Joseph as “a top run defender who can also pressure the quarterback from the interior of the defensive line when the situation presents itself.”

Minnesota was fortunate enough to sign Joseph in free agency prior to last season, and the tackle feels confident in his role, the defensive system and also the teammates he plays alongside. Things are falling into place, and Joseph feels his team is headed in the right direction.

He’s been to one Super Bowl, and he optimistically plans to make it to another—this time with the Vikings.

“I see it,” Joseph said of making it to the big dance. “I have a good feeling. I see it, and right now we just got to stay together and just keep doing our job.”

And if there’s anyone you can count on to keep working, it’s Linval Joseph.