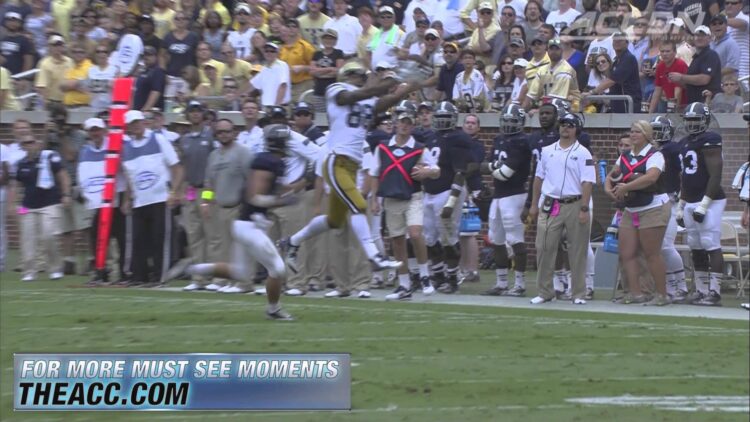 Georgia Tech’s triple-option attack breeds success on the ground — in 2014, the Yellow Jackets averaged 342.1 rushing yards per game, second-best in all of FBS. Pre-snap motion, backfield deception, and misdirection open a multitude of running lanes, but also open up opportunities in the passing game.

In stark contrast to its prolific rushing numbers, Georgia Tech averaged just 134.4 passing yards per game, ranking 123rd in the FBS last season. Wide receivers aren’t usually the team’s playmakers, but the transition from collegiate football to the NFL has been wildly successful for two Yellow Jackets — Demaryius Thomas and Calvin Johnson.

Considered two of the league’s best receivers, both players were first-round draft picks and quickly proved doubters wrong, showing the ability to run more than just skinny posts and comebacks in the NFL. Another Georgia Tech product, Stephen Hill, was a second-round draft pick with the Jets in 2012, but quickly flamed out when he couldn’t combine his athleticism with the game’s fundamentals.

This year, senior wide receiver Darren Waller will look to follow in the footsteps of players like Thomas and Johnson. In a deep draft class, he’ll fall to the lower rounds, where the Minnesota Vikings could take a chance on the 6’6″, 238-pound prospect. One question remains — will he be able to connect the dots in the NFL, or fall by the wayside like Stephen Hill?

The first thing that stands out about Waller is his size — at 6’6″ and 238 pounds, he ranks in the 98th and 99th percentile, respectively, among all 2015 NFL Draft wide receiver prospects. Unfortunately, that size is nearly negated by his 9″ hands, extremely small for his massive frame (17th percentile). His arms, at 33 1/4″, are the same length as those of DeVante Parker, Louisville’s highly regarded wide receiver and a potential choice when the Vikings select 11th-overall later this month.

Though not lighting fast, Waller is a long strider with the straight line speed to burn defenses down the field. At the NFL Scouting Combine, he ran the 40-yard dash in 4.46 seconds, just .01 seconds slower than Parker. His cone drills were mediocre, but Waller’s game does not rely on quick-twitch abilities; rather, Waller is a jump ball specialist and ideal red zone target.

As some background, Waller saw most of his playing time as a senior at Georgia Tech. In 2014, he caught 26 passes for 442 yards (17 yards per catch) and 6 touchdowns. In the two previous seasons, he caught a combined 25 passes for 529 yards and 0 touchdowns.

The numbers don’t stand out, but in Georgia Tech’s run-heavy offense, his numbers are impressive. This is especially true when looking at his final two games as a Yellow Jacket, where he was asked to take on the No. 1 role when teammate DeAndre Smelter was lost to a knee injury.

In the ACC Championship game against Florida State, he caught 5 balls for 73 yards and a touchdown. Georgia Tech would lose that game, but Waller enjoyed success against one of the country’s better secondaries. In an Orange Bowl win over Mississippi State, Waller “took the top off the defense”, catching another 5 balls for  career-high 114 yards and 1 touchdown. The play below showcases some of Waller’s better traits as a receiver:

Waller gets a free release off the line of scrimmage, giving him time to tap into that 4.46 speed. The cornerback stops his feet early in the route, most likely after peeking in the backfield. Waller blazes past the corner, and the quarterback recognizes not only the cushion, but the heigh advantage.

As the ball flies through the air, Waller adjusts, tracking it to the goal line and positioning his body for the catch. He uses his size and frame exceptionally well, boxing out the corner and outstretching his long arms to pluck the ball out of the air. At his height, Waller is almost always at an advantage over smaller corners, and shows confidence in his abilities in 50-50 situations.

In this regard, the Georgia Tech senior has the potential to be an excellent red zone threat in any offense. He has the speed to beat corners down the field, but also has the body control to make more difficult catches — the sideline fades and the back shoulder throws. Here, he’s almost impossible to defend.

Though an undeniable talent, Waller does not enter the NFL without concerns. One of those, unfortunately, involves his off-field behavior. He missed two games in 2014 after violating team rules ( tested positive for marijuana), and was also suspended for the 2013 season opener. In an interview with the NFL’s Mike Huguenin, Waller expressed his desire to find a true passion for football:

[quote_center]”Passion for the game is just there rather than having to think about it.”  [/quote_center]

He corrected this behavior and earned an invite to the 2015 East-West Shrine Game, giving teams a chance to break down both the on-field good and bad.

As we’ve discussed, Georgia Tech is a run-heavy team that consistently asks receivers to make critical blocks on the edge. Waller, surprisingly, is a below-average blocker, giving up quickly when he senses he’s lost the one-on-one battles. Below, an example of his lethargic efforts.

Rather than finish his block, Waller allows the corner to fight to his outside and rally to the running back. His assignment doesn’t make the tackle, but plays to the whistle — a habit Waller will need to form once he steps on an NFL practice field.

Waller, like many Georgia Tech receivers, leaves school as an unpolished route runner. His repertoire of patterns as a Yellow Jacket included streaks, comebacks, curls, and posts.

In the NFL, that will triple, and he’ll need to develop more quick-twitch ability to be successful in the short passing game. Specifically, he’ll need to tighten his in-breaking and out routes, which he tended to round off.

And finally, Waller must become a master of his body. His ability to box our cornerbacks and win jump balls is a testament to his raw size and athletic prowess. But, he can improve. Cornerbacks closed the gap created by Waller’s speed, crowding him at the catch point and making those routine catches harder than they should have been. With his length and size advantage, Waller should have no problem adjusting this at the next level.

One of the biggest concerns with Waller is his untapped passion for football. In order to unlock his full potential, he’ll need to light a fire and find the willpower to be more than just another Stephen Hill. He has a deadly combination of size and speed, with soft hands and excellent body control to outplay almost any corner in the league. Teddy Bridgewater would love to throw the ball to a target like Waller in the red zone, and he would have a chance to make an early impact if the Vikings were to draft him in the later rounds.

Check out our other Sleeper Sunday profiles from Adam and Carl! Check back next week for a new set of scouting reports from the team at Vikings Territory.