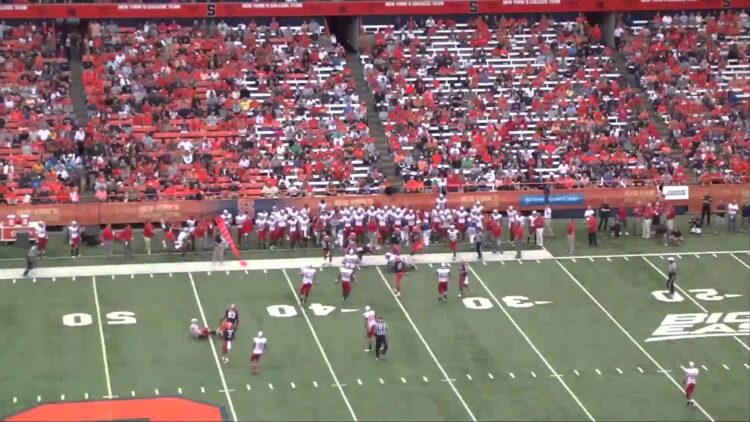 We are another Sunday closer to the 2015 NFL Draft and that means we have another batch of “sleeper” articles lined up for you today.

Wide out Adrian Coxson is a player whose talent and attributes warrant a late selection all on their own, but he also happens to be one of the most interesting stories in this class. In a selfish sort of way, I like that because it gives us something to write about between May and August.

On Draft Weekend, Coxson will be listed as a “Stony Brook” player in his player profiles on your TV screen. The truth is that Stony Brook was his third college program and, unlike many players with similar resumes, his movement around the college scene had nothing to do with getting in trouble.

Coxson (6′ 1″ and 215 pounds) was a highly recruited high school player that ended up deciding between a number of highly-rated schools to land in Florida. Coxson left Florida for completely understandable and admirable reasons. His sick father went blind and he felt a need to be closer to his family. He decided to attend Maryland, closer to his home and family, and the transfer resulted in having to sit a year out due to college rules.

In that year off, the entire coaching staff that recruited Coxson at Maryland was fired and 22 of their scholarship players left as a result. Coxson understandably decided to be number 23 and that is how he ended up at Stony Brook where he predictably dominated opponents despite being in a running offense.

I see Coxson as one of the more well-rounded wide out prospects in this year’s class in terms of skill set. He is a crisp route runner, has some sharp moves that allow him to get open, is a fine hands catcher, blocks quite well for the position, and can embarrass defenders on his way to extra yardage after the catch. I really can see him developing into a true deep threat in the NFL.

Once expected to be a sure-thing replacement for Percy Harvin and Riley Cooper in Florida, under head coach Urban Meyer, Coxson will instead be viewed as a “small school talent” that bounced around too long to be worth much of anything at the next level. That perception, if NFL front offices and coaching staffs can’t see past it, certainly places an uphill battle at his feet.

To help prepare for the NFL, Coxson used some connections to get together with a former NFL receiver that Vikings fans will be plenty familiar with, Qadry Ismail. “The missile” has been working Coxson out and helping get him ready for his opportunity, helping him through the pre-Draft process with the goal being of getting Coxson’s name called on Draft Weekend.

“What I’ve seen is he is every bit of a very good, fluid moving, very fast young man with the size,” Ismail says of Coxson. “You mix that with the strong work ethic, then you wind up having a guy that could literally be very effective when it comes to helping himself move up the draft.”

Last week, at a pro day the Vikings are not known to have attended, Coxson ran the forty-yard dash in 4.28 and 4.33 seconds, which is pretty eye-popping. According to Aaron Wilson, he also had a 34″ vertical jump and bench pressed 225 pounds 15 times.

If Coxson used to be a secret, that is probably no longer the case, and he is getting levels of interest from the Packers, Giants, Chiefs, Bills and some others.

“I definitely feel like the arrow is pointing up,” Coxson said following his pro day. “People are actually starting to notice my skill set. That’s a great feeling.”