Potential Vikings Draft Targets In The Second Round 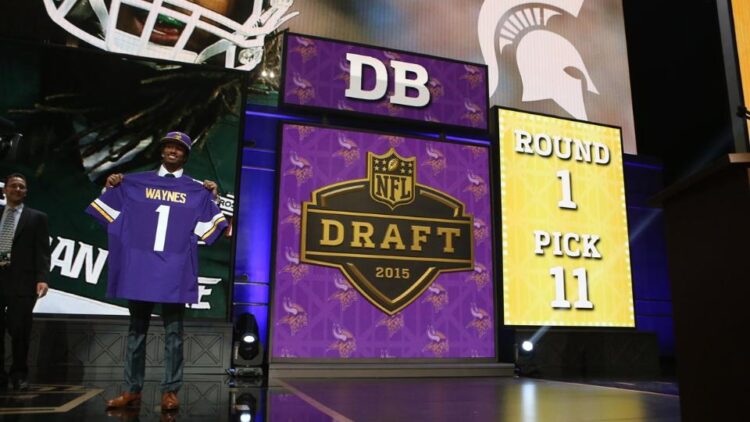 Something else most Vikings fans have become accustomed to? Not being an active being participant in the second round. Continually moving back into the first round prior years came at the cost of not having a second round selection. That’s not to say those decisions were wrong in anyway (they were pretty awesome more often than not, if I’m being candid), they just usually made Day 2 of the draft a little less interesting.

This year the Vikings currently hold the following Day 2 picks:

The Vikings are in a good position at the top half of the second round to add some exceptional talent to their roster. Below we’ve round up who some of those prospects the Vikings could potentially target.

Randy Gregory has the potential to be the best edge rusher from this draft class. But multiple issues, both off-the-field and on, resulted in him sliding out of the first round. As a pure prospect, personal issues aside, Gregory was one of the top edge rushers in college football the past two years. He is extremely athletic, gets off the line quickly, has numerous pass-rushing moves and instincts to know how to attack offensive tackles.  However, there are questions about his size especially after weighing in lighter than expected at the NFL Combine. Off-the-field and mentally, there are a lot more question marks surrounding him. Gregory tested positive for marijuana at the NFL Combine after telling teams he hadn’t smoked pot since November. Maybe more alarming for NFL teams are the recent reports that there are concerns regarding Gregory’s capacity to handle “the mental rigors of professional football.” According to Ian Rapoport, Gregory was removed from multiple team’s draft boards altogether.

[pull_quote_center]At least three general managers view him as a top-five talent. But according to more than a dozen coaches, scouts, personnel chiefs and GMs, there is concern about Gregory’s ability to handle the mental rigors of professional football. And just how far he drops in this week’s draft will likely hinge on the individual psychological profiles (and the results of related testing) put together by each team, according to multiple veteran evaluators. He has been taken off a several team’s draft boards, according to multiple sources.[/pull_quote_center]

Despite the laundry list of concerns now surrounding Gregory, the dynamic edge rusher from Nebraska could be a great selection for the Vikings early in the second round.

One of the most likely players to be selected quickly at the beginning of the second round, probably by the Buccaneers, is Alabama safety Landon Collins. However, there is always a chance he could fall even further to the Vikings or they make the decision to move up slightly to grab him. Landon Collins is a physical safety who does well in-the-box against the run. And although he excels at tackling and defending the run, Collins is no slouch in pass coverage. Harrison Smith and Collins would make a physical, formidable duo in the Vikings secondary.

Check out our scouting report of Landon Collins via Luke Inman of eDraft.com.

Eric Kendricks, a favorite amongst Vikings fans, was not selected at the end of the first round despite popular opinion that he would be. The UCLA linebacker represents a great opportunity for the Vikings to finally shore up that position group for many years to come. Kendricks, who was a teammate of last year’s draft selection, and rookie stand-out, Anthony Barr, is a fiery competitor who has the athleticism and the instincts to start quickly in the NFL. He also has an NFL pedigree (Mychal Kendricks, linebacker for the Eagles), college production and an impressive football intellect. Thought slightly undersized, Kendricks was considered by many to be a first round prospect and would be a great value for the Vikings.

Green-Beckham’s off-the-field issues are well documented and ultimately resulted in him falling out of the first round. Make no mistake though, DGB is an elite prospect with an incredibly high ceiling. At 6-5, 237 lbs., Green-Beckham is a rare physical specimen with exceptional athleticism. He has a long-stride and the acceleration to get down the field in a hurry and then the length to go up and get the ball in contested situations. Ultimately though, the questions surrounding his character may force the Vikings to pass on this promising prospect even if he is still available.

Preston Smith is the kind of defensive end Mike Zimmer covets – versatile, reliable against the run, sheds blocks easily and is an above-average pass rusher. Smith also met with the Vikings at the beginning of April. The Vikings were unimpressive in 2014 stopping the run and we know that drives Mike Zimmer crazy. Brian Robison is nearing the end of his career and has regressed recently anyway. If Smith is selected by the Vikings, he would be an instant addition and upgrade to the Vikings defensive end rotation and could contribute significantly to being better against the run.

Another fan favorite linebacker, Paul Dawson jumps off the screen when you watch his tape but is underwhelming athletically. However, Dawson has elite instincts that makes up for his lack of athletic prowess. He may be two steps behind due to his speed, but he also may be two steps ahead because of his ability to diagnose the play. There are some character concerns surrounding Dawson though he was worked hard to dispute that perception. Dawson is what some would call a “football player” and could be a great addition to the Vikings if Zimmer signs off.

(Was a potential top-15 pick until a recent off-the-field issue which is currently unresolved.)

Vikings Territory coverage of the NFL Draft picks back up tonight shortly before the 2nd round gets kicked off (7PM EST). Make sure to keep it here for our live blog, up-to-the-minute big board, live tweets from Winter Park and our bustling live chat.