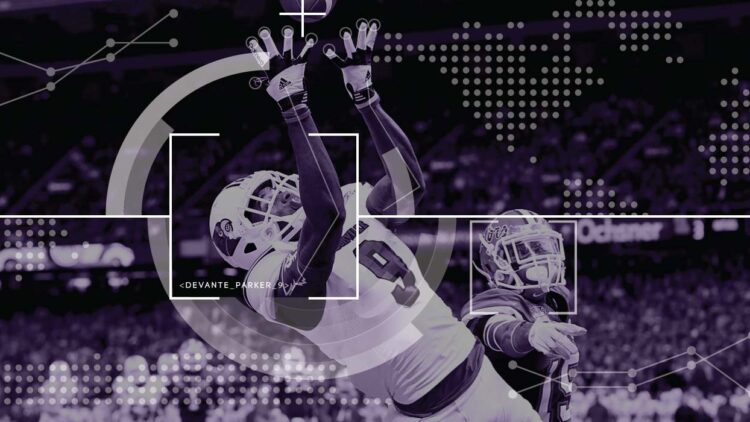 [Editor’s note: This is another installment in a series we will be running at Vikings Territory providing scouting reports for players the Vikings could potentially target in the 2015 Draft. All scouting reports are provided in partnership with Luke Inman and eDraft.com. You can find all of our previous scouting reports here. Continue reading below to learn more about DeVante Parker, Teddy Bridgewater’s favorite receiver at Louisville.]

The above spider graph, courtesy of Mockdraftable.com, shows what percentile this player is against other players at the same position. Clicking the “Measurements & Comparisons” tab on the bottom of the graphic will show additional Measurements information along with player comparisons from the Mockdraftable.com database based strictly off historic measurable data.

Fit with the Vikings:

I completely understand when I hear Vikings fans express their interest and desire in wide-out Amari Cooper. After all, anytime you can add a premier talent like Cooper, it behooves the team, in both the short and long term plans, to add a blue chip talent. However, as my latest Cooper scouting report broke down, my qualm with adding Cooper to the Vikings is his strengths point to him being, at his best, a number two receiver or in the slot. Remind you of anyone? Amari Cooper and Greg Jennings provide a similar role to one another and don’t complement each other in this offense. Meanwhile, Parker offers the exact opposite attributes, acting as a deep, down-field threat that is a mismatch anytime he is lined up one-on-one with a defender. Trust me when I say, Parker is a nightmare to defend in one-on-one situations.

On top of his deep speed, Parker is red zone threat and jump-ball demon that provides a perfect balance and complement to the Vikings offense. Parker would allow Jennings to get cozy in his most natural position — inside at the slot. Adding Parker to the group would help complete the Vikings’ receiving corp puzzle that has been just one piece away for some time.

Maybe more importantly, Parker would be a vital piece to Norv Turner‘s vertical offense, one that has been vacant since Turner showed up to Winter Park. The addition of Parker would also open up underneath routes for the Vikings’ other play-makers. Parker is a player that can push the safeties back, forcing them to stay honest.

Etch this one in stone because here is my hot take:

As good as Cooper and White could be, my personal opinion is that DeVante Parker is THE GUY you want on the Vikings offense.

And not just because he will give the team an offensive piece that has been missing since Randy Moss left, but because he complements the Vikings’ offense incredibly well.

Parker has solidified himself as one of the top three receivers in this draft but is still clearly behind his two peers, Kevin White and Amari Cooper, in the minds of a majority of draft analysts.

A lot can (and will) happen between now and the draft. And I promise you, once the ebb and flow of the process gets in full motion, Parker will be talked about and rotated in as the top wide receiver in this class. It wouldn’t surprise to eventually hear Parker’s name in the same sentence as the Oakland Raiders at pick number four. Behind the Raiders sits Chicago, a team now in need of a receiver opposite Alshon Jeffery with the recent departure of Brandon Marshall. The most realistic scenario for Parker on draft day would be slipping to the Rams, Vikings or Browns.

Check out the below Draft Profile Breakdown of DeVante Parker courtesy of eDraft.com.