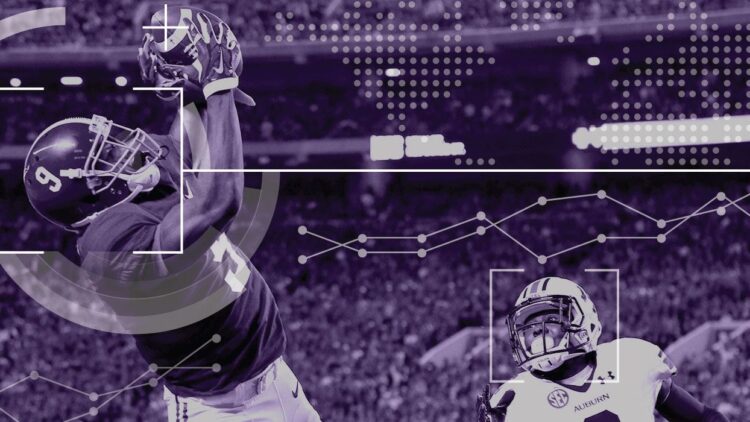 [vc_row][vc_column][vc_column_text][Editor’s note: This is another installment in a series we will be running at Vikings Territory providing scouting reports for players the Vikings could potentially target in the 2015 Draft. All scouting reports are provided in partnership with Luke Inman and eDraft.com. You can find all of our previous scouting reports here. Continue reading below to learn more about Amari Cooper who was the heavy favorite to be the first wide receiver drafted until the recent rise of Kevin White.]

The above spider graph, courtesy of Mockdraftable.com, shows what percentile this player is against other players at the same position. Clicking the “Measurements & Comparisons” tab on the bottom of the graphic will show additional Measurements information along with player comparisons from the Mockdraftable.com database based strictly off historic measurable data.

Fit with the Vikings:

I watched a lot of Amari Cooper film and, boy, do I love his game and how he’s going to translate to the NFL. Quick and savvy off the line of scrimmage, Cooper gets a good release into his route, runs great patterns and has reliable hands – all things that equate to a smooth transition at the next level. However, something that just can’t be put into words is his acceleration and football speed with pads on. Cooper is just so good in-and-out of his cuts with a circus-like burst out of a canon that he always seems to get himself open. But plenty of receivers have speed and hands, so what separates Cooper from his peers? For me, its his football IQ and understanding of the game. Recognizing a blitz on third and short, Cooper will cut his route short and find the soft spot in the zone, offering up a trustworthy target when his quarterback needs him most. It’s the little things like this that have me convinced Cooper is not just the safest receiver in this class, but a blue-chip prospect that doesn’t come around often.

Knowing all of that, the Vikings would be foolish to pass on a prospect like that at pick 11, especially when it’s at a position of need. But, where would Cooper fit in the Vikings depth chart amongst what seems to be a crowded group of wide-outs? As a “smaller” wide-out that is solid from the outside but really excels from the slot, Cooper seems to match the role Greg Jennings already owns. Remember, what this offense needs most in Norv Turner’s system is a receiver that can consistently stretch the field vertically and win one-on-one matchups down the field. Unfortunately, that is not Cooper’s game. As tough as it is to say, Cooper doesn’t complement the Vikings’ needs from the wide-out position, but instead, duplicates a bit of both Greg Jennings’ and Charles Johnson’s strengths and style. And while Cooper may grade out as a better talent or as a pure prospect, a player like Kevin White or, my personal favorite, Devante Parker, fits the Vikings’ needs better.[/vc_column_text][/vc_column][/vc_row][vc_row css=”.vc_custom_1425269574902{margin-bottom: 32px !important;padding-top: 15px !important;padding-right: 15px !important;padding-bottom: 15px !important;padding-left: 15px !important;background-color: #582d83 !important;}”][vc_column width=”1/1″][vc_column_text css_animation=”appear”]

Check out the below Draft Profile Breakdown of Amari Cooper courtesy of eDraft.com.