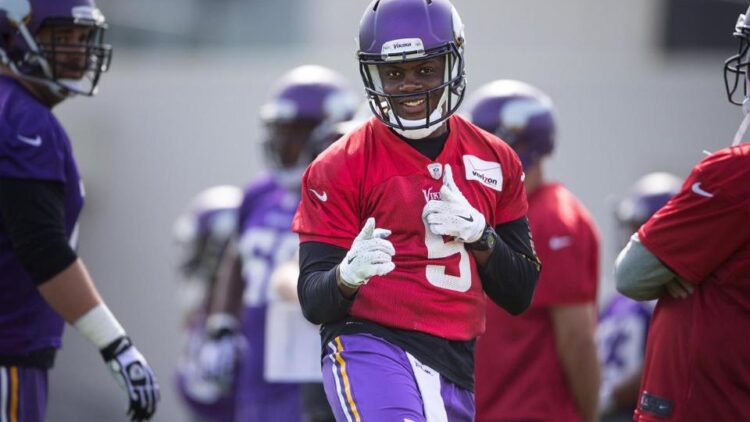 In an ESPN article posted Monday, NFL senior writer John Clayton said the Vikings are in the running for a 2015 playoff team.

In the article, Clayton cites a few factors in his analysis. Teddy Bridgewater certainly shoulders much of the responsibility moving forward—Clayton did offer praise for Bridgewater’s rookie season—but it’s more than just the quarterback at this point…

It’s adding Adrian Peterson back into the equation and seeing how much better Peterson makes Bridgewater. Clayton reminded us of the following:

[quote_box_center]Russell Wilson, Colin Kaepernick and Cam Newton were success stories early in their careers because of their talent — and because they had the benefit of running attacks that typically produced 130 yards or more. (Yes, you can pile up added rushing yardage late in wins, but all three of these teams built around the run.) Look what Peterson did for Christian Ponder. In 2012, Peterson rushed for 2,097 yards coming off knee surgery. Ponder averaged 23.7 points per game and the Vikings made the playoffs. After four years, Minnesota determined Ponder wasn’t good enough and moved on to Bridgewater.[/quote_box_center]

I like Clayton’s take on this. Granted, the team needs both AP and TB to play well; there’s no doubt about that. But individually, neither player is as strong as the way they can feed off each other. Bridgewater had a solid debut season (averaging 22.1 points per game) without Peterson on the field, and having the star RB back in the lineup will take a bit of the pressure off Bridgewater’s shoulders.

There are still probably a few question marks surrounding Peterson and his return, but I have to believe he’ll play with a chip on his shoulder and be ready to rumble.

Clayton also mentioned the [hopefully] healthy roster the Vikings will have headed into 2015 after playing a majority of last year without Kyle Rudolph, Brandon Fusco and Phil Loadholt. Quite a few weeks remain until the regular season kicks off, but things are looking much more in Minnesota’s favor.

At the end of the day, it’s a great feeling to see the Vikings gaining some national attention.