NFC NORTH ROUNDUP: Vikings Will Play at “The Bank” 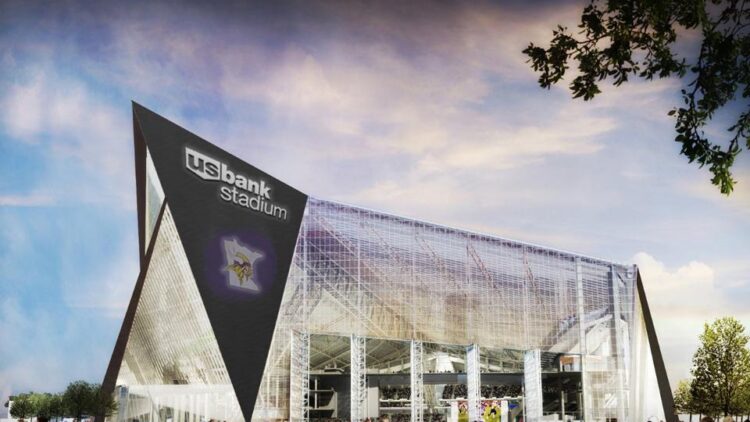 I’ve been away from Vikings Territory for a week, and man, does it feel good to be back behind the keyboard. To those who stuck with me through the work tweets and barrage of conference photos — thank you. I’ll return your investment by providing what I know best; Minnesota Vikings news and analysis!

Earlier today, the team announced the name of their new stadium, awarding rights to U.S. Bank for the next 20 years. Once the 2016 season begins, the Vikings will play all home games in U.S. Bank Stadium, which is more than halfway complete. The Vikings also announced their “Places to Play” program, a multi-year, $1,000,000, statewide investment into locations for Minnesota youth to play.

The partnership with U.S. Bank signals a commitment to improving the quality of life in Minnesota and providing the community with one of the nation’s most impressive multi-use stadiums. After the press release, Vikings owner and president Mark Wilf commented on the deal:

[quote_center]“On behalf of the entire Minnesota Vikings organization, we would like to thank Richard and the 67,000 U.S. Bank employees for their belief in, and support of, the Vikings and this new stadium and for the commitment they make in the economic and social well-being of Minnesota and its citizens every day.”[/quote_center]

Things are looking up for the Vikings, huh? Let’s see how things are going elsewhere in the NFC North:

Aaron Rodgers is widely regarded as one of the league’s best quarterbacks, but even the game’s most elite minds don’t call their own offensive plays. As reported by ESPN’s Rob Demovsky, Rodgers does not have full control over the Packers’ play calls. Rather, he takes plays from offensive coordinator Tom Clements and is free to adjust as he sees fit at the line of scrimmage.

When asked why he doesn’t serve as a dual coordinator and player, Rodgers responded curtly:

Rodgers was obviously referring to Peyton Manning, whose “Omaha” calls have become famous among fans and analysts alike. Like Rodgers, Manning doesn’t yell to call the next offensive play; he yells to make adjustments, from blocking assignments to route options. Though Clements calls the plays, Rodgers is still playing quarterback, and that’s a problem for any NFL defense.

Is there tight end trouble in Detroit? If you’re monitoring the waiver wire, your answer would be “yes”. Over the weekend, the Lions placed a waiver claim on Tim Wright, who was recently released by the New England Patriots and caught 26 passes for the Super Bowl champions in 2014. Wright landed with the Tampa Bay Buccaneers, leaving the Lions and nine other teams empty-handed on Monday.

Currently, the Lions have six tight ends on the roster, including last year’s first-round pick Eric Ebron and the team’s veteran starter, Brandon Pettigrew. Their third tight end, Joseph Fauria missed most of last season with a suspicious ankle injury and has not participated in any of the team’s offseason workouts. With that much talent at one position, it’s shocking that those players combined for just 41 catches last season.

Wright, a converted college receiver, would have been a nice pass-catching option in the Lions’ offense. Having missed out, Detroit will need to find a way to get more production this season out of Ebron, who was expected to make a Gronkowski-like impact in his rookie year but disappeared behind Golden Tate and Calvin Johnson.

What was once a problem in Chicago is now a solution, as Martellus Bennett will report to the Bears’ minicamp on Tuesday. The veteran tight end, who has expressed dissatisfaction with his contract situation, completed a physical at team facilities on Monday and will participate on-field during Tuesday’s workouts.

Last season, Bennett caught 90 passes for 916 yards, earning a trip to the Pro Bowl and proving himself to be one of Jay Cutler’s most reliable targets. He is set to make $4.9 million in 2015 and skipped the team’s voluntary workouts over the dispute.