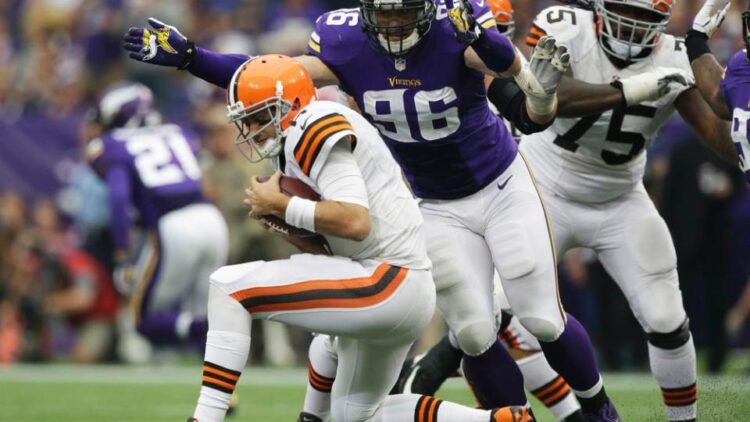 If you haven’t been keeping up with the latest free agency news, be sure to follow Arif’s live blog here on Vikings Territory.

Sunday marked the second day of a busy free agent tampering period, which saw the Vikings sign two key players to new contracts. Tom Johnson, a cog in the defensive tackle rotation, agreed to a three-year, $7 million contract with $3 million in guarantees. The Vikings’ long snapper, Cullen Loeffler, also signed a one-year deal with the team.

In addition to the signings, reports also linked the Vikings to a few more free agent names, including guard Mike Iupati and safety Rahim Moore. Below, we take a quick look at all of the potential targets:

Source: The #Vikings and #49ers are among teams that have called expressing interest in impending UFA QB Brian Hoyer. #Browns #NFL

As ESPN’s Josina Anderson reported, the Vikings “expressed interested” in Brian Hoyer, the Browns’ former starting quarterback. It’s difficult to imagine Rick Spielman bringing in Hoyer, who many believe is seeking a starting position with a quarterback-needy team.

Yesterday, reports linked the Vikings to former Rams quarterback Shaun Hill, who would be a much cheaper option behind Teddy Bridgewater and has some familiarity with offensive coordinator Norv Turner.

In his time as the Browns’ signal caller in 2014, Hoyer completed 55.3 percent of his passes for 3,326 yards, 12 touchdowns, and 13 interceptions. He enjoyed limited success in Cleveland’s anemic offense, but does not appear to be a good fit as the number two option in Minnesota.

@ArifHasanNFL @christomasson I disagree and think they have no or little interest.

As Arif reported this morning, the Vikings are planning to make former Denver Broncos safety Rahim Moore a priority in free agency.

Moore is Viking Territory’s number 10 free agent target, and at 25 years old, is just entering the prime of his career. Though he suffered from compartment syndrome in his leg in 2013, Moore is almost fully recovered and ranks as one of the better coverage safeties in the league.

He is expected to garner $5 million on the open market and could be a potential steal this offseason — a perfect complement to Harrison Smith in the secondary.

The #Vikings have reached out to free-agent safety Taylor Mays, per a league source. Mays played for Mike Zimmer in Cincinnati.

Per Matt Vensel, the Vikings reached out to Taylor Mays — a safety under Mike Zimmer in Cincinnati — on Sunday. Known more for his Combine performance than his on-field play, Mays is nothing more than added depth to an above-average group of Vikings safeties.

Mays is just 27 years old, but has done little more for the Bengals than contribute on special teams. From 2010 to 2014, he tallied 98 total tackles, with one sack and zero interceptions.

Currently, Mays projects as a temporary band-aid in the secondary and emergency starter in the event of an unforeseen injury. If the Vikings were to go “all-in” on a safety, they’d be wise to go hard after Rahim Moore.

For months, I’ve seen fans on Twitter clamor over the 49ers’ Mike Iupati. Earlier today, Chris Thomasson of the Pioneer Press put a smile on their faces when he reported that the Vikings reached out to the Pro Bowl guard.

Although Iupati is Vikings Territory’s number 27 free agent target, he could be too expensive for Rick Spielman’s tastes — John Middlekauff reported that Iupati is demanding $8.5 million per year.

The Vikings need to protect Teddy Bridgewater, but Iupati is a much better run blocker than he is dropping into pass protection. With his expensive contract demands and deficiencies as a pass blocker, Iupati is an unrealistic replacement to the recently-departed Charlie Johnson.

I see this as Rick Spielman and company gauging the free agent guard market.

Remember, our very own Arif Hasan is live-blogging all of the latest free agency news and bringing you up-to-date developments and signings. Head over and check it out now!