Report: “Vikings expected to be in the mix for Michael Crabtree” 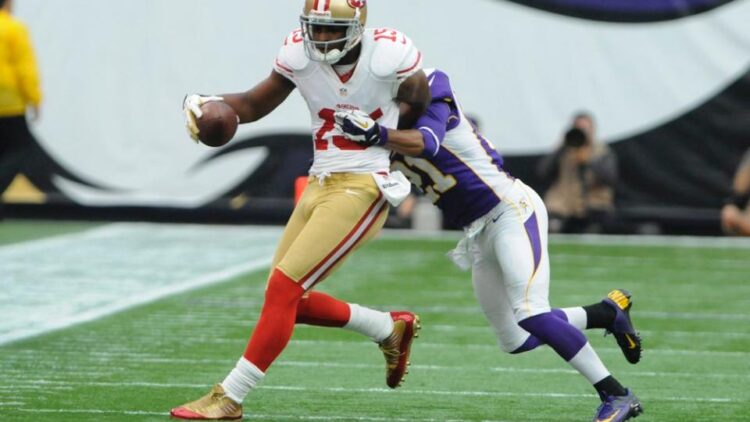 Earlier this afternoon, it was tweeted that the Vikings are expected to be in the mix for former San Francisco wide receiver Michael Crabtree. Entering his 7th season in the NFL, Crabtree is likely looking for a new home with former Baltimore Raven Torrey Smith about to sign with San Fransisco.

In my preview of free agent wide receivers, I noted a strong possibility of Crabtree being a target due to a variety of factors: his age, salary expectations and skill. I stay true to my opinion that Crabtree would be a strong addition to the Vikings for those exact reasons.

As I noted, Crabtree has struggled through a history of injuries, but is not short of talent. Only 27 years old, Crabtree was drafted 10th overall out of Texas Tech in 2009.

Crabtree’s best season was without a doubt 2012 when he tallied 85 receptions for 1,105 yards and 9 touchdowns. The Vikings could use that kind of production from a receiver and due to Crabtree’s up and downs in San Francisco, they could find it at a relatively low cost.

This is a deal that just screams Rick Spielman, in my opinion. Spielman is notable for giving out 1 year ‘prove it’ type of deals for players who might be looking for a fresh start, new system or a rejuvenation of their career.

The Vikings just recently resigned Tom Johnson, who signed a similar deal last year and seemingly came out of no where to tally 6 sacks in 2014. Not a bad showing at all for a 30 year old interior defensive lineman.

Again, I admittedly am a huge fan of the idea of signing Crabtree. Some could argue he’s essentially the same receiver as Greg Jennings, but I like Crabtree’s youth and his potential to play with a chip on his shoulder. Not to mention, Crabtree has spent the majority of his career playing on the outside, not primarily a slot receiver like Jennings.

Those clamoring for a first round wide receiver might get their wish, it’s just that the receiver is already 27 and has been in the league for 6 years.

Be sure to check out the Vikings Territory Free Agency Live Blog presented by Arif Hasan for all of the latest news, rumors, and analysis.