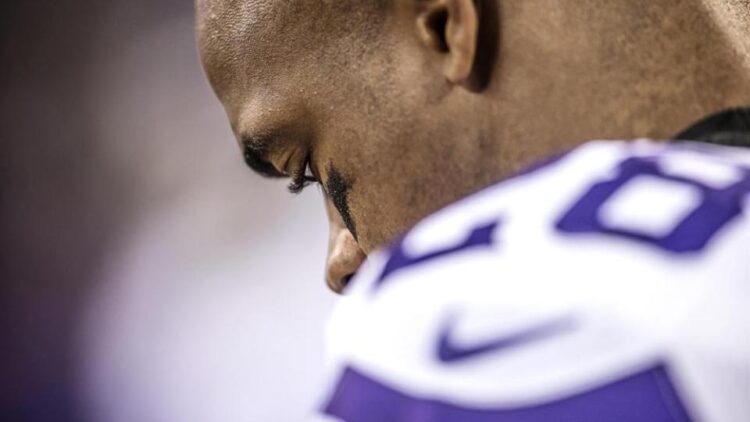 According to a report by the USA Today’s Tom Pelissero, Minnesota Vikings running back Adrian Peterson flew to New York on Monday, where he met with owners Zygi and Mark Wilf and general manager Rick Spielman.

The meeting appears to be a continuation of ongoing discussions with the star running back  — last week, head coach Mike Zimmer and Spielman traveled to Houston and discussed Peterson’s future at his Texas home.

The free agency deadline approaches, and the Vikings front office is doing all it can to either retain Peterson or find a willing trade partner. As Arif reported, the Vikings are working hard to “dump” Peterson, who has expressed interest in five teams — the Cowboys, Chargers, Colts, Cardinals, and Buccaneers.

In a curious turn of events, Peterson took a commercial flight from Houston to LaGuardia Airport on Monday — many believed the Wilfs would have sent their private jet for Peterson’s trip. More on that tidbit from the Pelissero interview:

[quote_box_center]”Adrian Peterson is conflicted about playing with the Vikings, but his wife and agent will play a role in determining things—like whether he chooses to play for the team. Further, Wolfson said after the interview that Peterson’s camp is confused as to why the Wilfs didn’t send their personal jet for the meeting”[/quote_box_center]

The situation is nearing critical mass, and we expect a resolution soon. Check back shortly for updates and continue monitoring Arif’s Free Agency Live Blog for all breaking news.