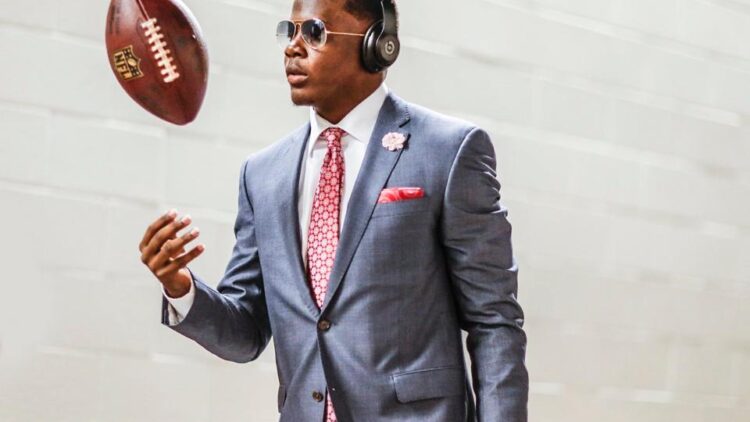 Howdy, everyone! Last week we had an awesome turnout for the first installment of what will be Vikings Territory’s weekly Fantasy Football contest. Not only did we manage to fill our tournament, but we also had a few people who weren’t able to join due to the player limit. While that’s unfortunate (and something we will work to correct by increasing the contest size as needed), it’s a positive sign that people out there are interested in joining in on the fun.

Last week we challenged you all to come compete against the staff here at Vikings Territory. Adam Warwas, Austin Belisle, Brian Hall, Matt Engstrom and myself all participated Week 1. How did we fare? Well, for starters, Brian Hall managed to walk away with first place winning $45 and proving to everyone he’s the guy to beat Week 2. Brian’s stack of Matt Ryan and Julio Jones put his team over the top and a whopping 20 points ahead of second place.

Here are the top-3 standings and where the VT staff ranked:

Overall, I’d say the VT team performed pretty well while leaving some definite room for improvement. On a personal level, I’m incredibly embarrassed about my abysmal performance but have convinced myself that, much like last weekend’s game against the Niners, it was 100% an anomaly that will never occur again. (This is necessary for my emotional well-being.)

This week we’ve opened up the contest to an additional five people bringing the total participant count to 25. As of right now, it’s about halfway full so you need to run, not walk, over to DraftKings using this link and enter now if you want to join. It’s only five bucks! And if you win, you’ll be able to publicly shame us in the comments. That has to be worth something.

DraftKings hosted a massive contest in Week 1 – the biggest in daily fantasy sports history. The winner of this contest won a ridiculous $2,000,000. Now, I want everyone to take a second and let that sink in. This person, who spent last weekend just like you and I, woke up Monday morning an everyday Joe, watched Monday Night Football with the rest of the world and went to bed that same night a multi-millionaire. This person, who goes by the username “Ballah” spent $20 dollars (or more if he entered multiple lineups) on fantasy football and can now probably never work another day in his life. It is unbelievable what is happening right now in daily fantasy sports.

Believe it or not, the Vikings actually played a critical role in making Ballah a multi-millionaire! Unfortunately, it wasn’t because Teddy Bridgewater blew up and threw for four touchdowns. It also wasn’t because Adrian Peterson played in his first game back with a vengeance running for 200 yards and two touchdowns in the process. Nope, it’s not because of any of those things. The Vikings made Ballah a millionaire because they could not stop Carlos Hyde to save their lives. Once again, the Vikings find themselves on the wrong side of history.

With just a few minutes left in the game, user “beisel90” was sitting right ahead of Ballah but only by a single point. As the game came to an end, the 49ers gave the ball to Hyde one more time resulting in 6 yards and just enough points to push Ballah ahead of beisel90 by a minuscule amount. (It’s okay, beisel90 was paid handsomely too.) Those six yards were literally worth a million dollars.

Interested to know what it takes to become a millionaire via fantasy sports? Check out Ballah’s winning lineup below: That doesn’t seem so hard, does it?

Personally, seeing the above gets me pumped up. Sure, some of this stuff is luck but Ballah’s lineup definitely had some overlap with some of my Week 1 lineups. Granted, the odds you’ll win the big one are pretty stacked… But, there’s always a chance.

Surprisingly, DraftKings has decided to repeat last week’s contest in Week 2 – same entry cost, same winnings. If you’re interested in trying to get in on some of that “Ballah” money, use the link below.

ENTER THE WEEK 2 DRAFTKINGS MILLIONAIRE MAKER FOR A CHANCE AT $2 MILLION.

Well, week 1 was a complete dud for you if you mistakenly featured any Vikings players in your lineup. If you go back and check last week’s outlook out, I cautioned that there were a lot of unknowns surrounding Game 1 against the 49ers. I also warned against using Peterson due to his high cost and uncertainty about how he would do his first game back. What I didn’t expect was the entire Vikings offense to come out and lay a big ol’ egg. But, like I said above, let’s just hope Week 1 was an anomaly. (There is part of me that really believes the team executed so poorly as a whole that it has to be a one-off situation .)

Let’s take a look at some of the values to be found on the Vikings roster this week:

Surprisingly, Adrian Peterson still finds himself atop the running back list, tied as the most expensive running back with Matt Forte. Although the Lions gave up about 100 yards rushing and two rushing touchdowns, their defense should not be taken lightly – specifically their defensive line. It’s hard to predict exactly how Peterson will perform considering we’ve still seen so little from him from such a long time, but last week he looked hesitant to hit the very few holes there were and, in general, lacking burst. For the second week in a row, I’ll be avoiding Adrian Peterson in any of my rosters.

Teddy certainly didn’t have a great game last week either. Uncharacteristically, Teddy looked rustled by the 49ers defense early. It’s pretty easy to see that there are some trust issues with the five guys in front of him on the offensive line. The good for Bridgewater this week? Detroit’s secondary looked awful week one against the Chargers and gave up more passing yards than any other team in the NFL against Phillip Rivers. The bad? Their defensive line could wreak havoc against our offensive line, causing Teddy to spend another game panicking and fending for his life. I think Teddy bounces back in the Vikings home opener, though, and have featured him as a good value play in a few lineups.

I’ve grouped these two guys together because, to be honest, it’s hard to separate the two when it comes to guessing what kind of offensive production they are going to have. Last week, Mike Wallace would have been a decent start in PPR leagues and all leagues, for that matter, had the Refs not completely blown an obvious defensive pass interference in the end zone on a dime of a throw from Teddy. Though Mike Wallace had twice as many targets and three times as many receptions, would anyone really be surprised if it were the other way around? If I had to pick, I think I would go with Wallace this week because I have a feeling him and Teddy will connect on a deep one. And quite honestly, with how cheap both of them are, the $600 doesn’t make a huge difference. However, neither of these two will be in my lineups this week. Maybe next week when the Vikings offense has [hopefully] right the ship.

Kyle Rudolph, at only $3,500, is the 14th most expensive tight end in Week 2. Rudolph was targeted 7 times for 5 receptions against the 49ers, totaling 53 yards and, obviously, zero touchdowns. Against the Lions in Week 1, young (but very talented) Chargers tight end Ladarius Green was able to put up 74 yards and one touchdown against the Lions suspect secondary. Green’s number of targets and receptions is close to Rudolph’s from last week and it’s not out of the question to assume a similar performance. Unfortunately, as it goes with tight ends, Rudolph’s value at tight end hinges on him being able to get into the end zone. The only lineup I own Kyle Rudolph in is one where I’ve stacked him with Teddy Bridgewater due to his low cost and low ownership.

So that’s it for Week 2. I can’t wait until things get started and we get to see who’s going to take the prize in this week’s contest. Again, if you haven’t already joined, make sure to do so quick so you can get a spot in the action. See you next week!