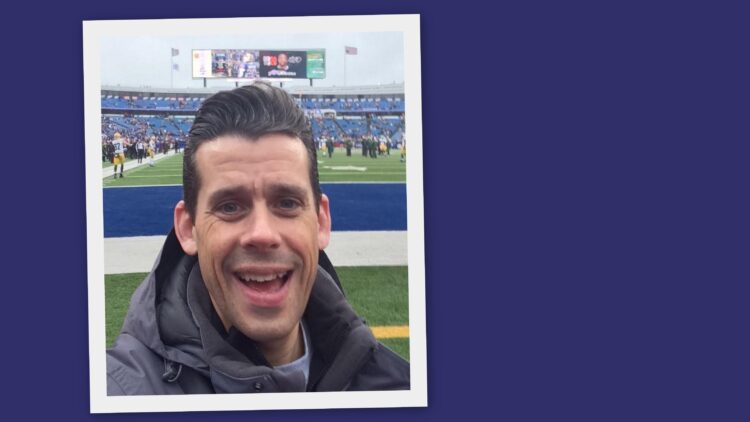 Here at Vikings Territory, we know better than most that it’s possible to find writing opportunities in all sorts of ways. Meet Tom Speicher. He got his start in 2003 when he entered a contest to be a Star Tribune web columnist for a year … and won.

Speicher was awarded the column for a season, after which he looked for new venues to write for and came across Vikings Update, which had been transformed into a monthly magazine.

“Eventually they hired me to write the ‘Where Are They Now?’ features on former [Vikings players],” Speicher explained. “It’s been a lot of fun! I have also had the opportunity to do assignments for the magazine at NFL Films and the Pro Football Hall of Fame.”

The position has provided Speicher with the chance to write features on Vikings alumni such as Fran Tarkenton, Chuck Foreman, Warren Moon, Scott Studwell, John Randle and Cris Carter … and that’s just to name a few. Being able to interview so many great players from different eras of the Minnesota Vikings has been a thrill for Speicher, who began supporting the team at just five years old. He vividly remembers being in the family basement on a Sunday afteroon, his dad flipping the channel to a Vikings game being played in the old Metropolitan Stadium.”The falling snow hooked me on the team,” Speicher said. “There’s been much heartache over the years with the team, but hopefully they make it back to the Super Bowl and the anguish will be extinguished for good!”

Interestingly enough, Speicher did not live in the Minnesota; rather, he is an East Coast boy.

[pull_quote_center]Growing up during the mid 1970s in Camp Hill, Pennsylvania and being a Vikings fan was tough. Most of my friends and classmates loved the dreaded Steelers. It was next to impossible to find and buy Minnesota merchandise. I’m still thankful that my mother ordered some Viking paraphanlia through the Sears catalog.[/pull_quote_center]

Speicher stuck with the Vikings, though, and his enthusiasm for the team and its future is evident. To the fan and writer, it’s clear that the Vikings are headed in the right direction. Looking ahead to the 2015 season, Speicher emphasized the continued development of Teddy Bridgewater as key. The rookie QB showed incredible poise last year, and Speicher is confident that—assuming an improved offensive line—Bridgewater can overcome a difficult schedule and lead the team to a winning record.

When asked about the position Minnesota is currently strongest at, Speicher pinpointed the defensive line. Everson Griffen and Sharrif Floyd already offer a strong threat for opposing offenses, and Speicher believes that veteran Brian Robison has a few more years in the tank. Add the potential of Linval Joseph to the pot, and Mike Zimmer has a quality line to work with.

In Speicher’s opinion, the team is lacking most at cornerback.

“Xavier Rhodes is solid, but the Vikes desperately need another high-caliber corner,” Speicher said. “Captain Munnerlyn showed last year that he is more of a nickel, and Josh Robinson remains a work in progress. As for newcomer Terrance Newman, who knows how much he has left?”

Consequently, Speicher would love to see Minnesota bring in Michigan State CB Trae Waynes in the NFL Draft. Free agency moves have been solid thus far, but in his mind, it all still comes down to Draft night.[pull_quote_center]You look around the league, the teams that traditionally ‘win’ the free agency period aren’t usually playing in January. For consistent, sustained growth, the Draft is the best avenue […] Waynes could solidify the team’s week link. I would not be surprised, however, if ‘Trader Rick’ moves down to accumulate more picks.[/pull_quote_center]Speicher is on pins and needles for the 2015 season along with the rest of us, and the fast-approaching Draft is just one more opportunity to add the missing puzzle pieces.

Come Thursday night, you can bet Speicher will be watching (in Steeler territory, no doubt) to see who the newest member to don the purple and gold will be …

And he can’t wait.

Favorite current Viking: Chad Greenway. The guy is a class act. He’s been a reliable performer on the field since 2007 and has contributed so much to the community. He really is a throwback.

If you could spend a day with any Viking, who would it be? Fran Tarkenton.  The man is fascinating. Interviewed him last spring and was so impressed by his energy and enthusiasm. He might be 75, but he’s more like a 25-year-old in spirit.

Hobbies (other than football): I like to play golf (which I stink at), and I like to read.

Favorite restaurant: Venice Pizza. It’s an amazing pizza joint near where I live in Williamsport, PA. If you ever visit here for the Little League World Series, make sure you experience Venice!