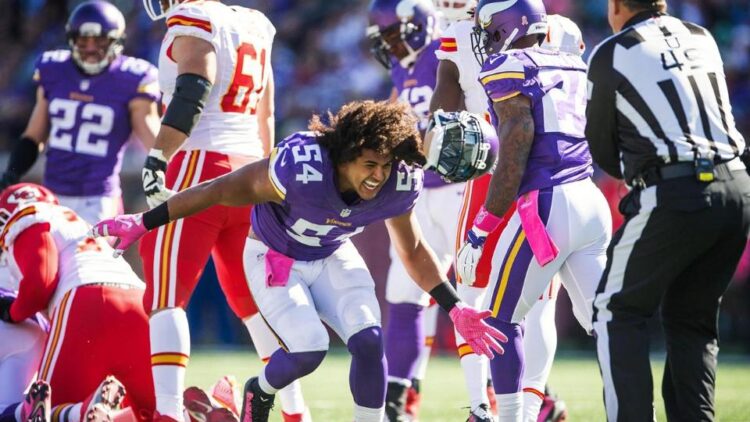 When the Minnesota Vikings “win ugly,” as they did against the Kansas City Chiefs last week, I find myself feeling worse than if they had lost a hard-fought game against an opponent like the Denver Broncos. Sure, their record improved to 3-2 after the 16-10 victory, but they looked average at best holding off a Chiefs team that shouldn’t have had a chance at TCF Bank Stadium.

At least in their Week 4 loss to the Broncos, the Vikings were competitive and looked like a playoff team, forcing two Peyton Manning interceptions and challenging the league’s best secondary through the air. I was encouraged by their losing effort, and turned the game off feeling optimistic about the team’s future. Once the Chiefs game ended, I was less enthused by a team that made far too many mistakes against Alex Smith and the rest of Andy Reid’s 1-5 squad.

Before I get too pessimistic, though, there’s plenty of positives to take away from the game. For one, rookies stepped up in a big way, from wide receiver Stefon Diggs to middle linebacker Eric Kendricks. Without Everson Griffen on the defensive line, even Danielle Hunter made the most of his opportunity, forcing a fumble and recording half a sack.

After the jump, I’ll take a look at a few of the Vikings’ strengths and how those plus plays led to a win last week.

Can you Diggs it?

The hype for Diggs before the season was already high, but after a breakout game on Sunday, we’re nearing Randy Moss-levels of excitement for the young receiver out of Maryland. With 13 catches through two games, he’s clearly one of Teddy Bridgewater’s favorite targets and is approaching the team-lead for receiving yards. It’s been exciting to watch him fool cornerbacks and explode out of breaks, but offensive coordinator Norv Turner is here to douse the fire and “slow down” the overreactions:

[quote_center]”Diggs has been impressive since he got here. I’m going to slow that down, he’s got a lot of work to do. We went in and played a man [coverage] team and put in a couple routes they’d never seen us run and he did a good job running them. I think he caught four balls in the first quarter. He’s going to be a real good player. He just has a lot of work to do.” [/quote_center]

He’s right — it’s been just two games, and we’re already crowning Diggs as the team’s best receiver. Like any rookie, there’s plenty of work to do — like protecting the football — and plenty of room for improvement. Still, it’s hard to deny the playmaking ability that Diggs brings to the Vikings whenever he steps foot on the field. He may be raw, but he’s talented enough to work through what Turner calls “inconsistencies” to be a long-term contributor for the Vikings.

Chiefs cornerback Marcus Peters is playing off-man on Diggs, who stems inside and up the field, giving Peters the impression he’s running a streak on the inside of the numbers. Like any corner in this situation, Peters opens his hips inside to run with Diggs, but is caught off-guard at the top of the receiver’s route.

Once Diggs hits 15 yards, he breaks outside, completely tuning Peters around and creating plenty of room for Bridgewater to deliver a perfect throw. Here, his vertical stem — the first three steps of his route — fool Peters into thinking this route is going deep. Because of his short area burst, Diggs can stop on a dime and break to the sideline faster than Peters can react.

“I kind of really study different angles of the film,” Diggs said yesterday. “You see how people’s bodies are, how they react to certain kind of moves — what foot they step with, what hand they jab with, and all that.”

That film study and preparation showed up early and often for Diggs, who had four catches in the first quarter alone. Here, he’s lined up in man-press on the top left of the screen, but is given a free release by the cornerback at the snap. He stems inside, and the cornerback establishes leverage over the top of the route  — good position for any in-breaking deep routes, like a post or a seam.

However, Diggs stops on a dime at 12 yards, and the results are not pleasant for the corner, who trips over his own feet and falls down trying to recover. Again, Diggs create separation with short area burst and turns the defender around, leading to a big play down the left sideline. The timing, comfort level, and anticipation are on full display between Bridgewater and Diggs — as soon as Diggs makes his break and clears the corner, the ball is out of Bridgewater’s hands.

The previous two plays were exciting examples of Diggs’s potential as a route runner, but here, he tests the defense with his speed and agility. The screen pass hits Diggs in stride, and he immediately turns upfield for a chunk gain. The blocking is sound, and he almost splits two defenders for what could have been a long touchdown. Had the offensive linemen reached their assignments sooner, it may have been the explosive play this offense is still missing.

Like his fellow rookie teammate, Eric Kendricks was nominated for the Pepsi Rookie of the Week award after Sunday’s game. The second-round pick out of UCLA recorded 13 tackles (11 solo), one sack, a quarterback hurry and defended two passes. He was the linchpin of an aggressive front seven, taking over the role left by departed linebacker Gerald Hodges. His first start in the middle of the defense led to success throughout the day for the Vikings, especially against the run.

Kendricks displayed great patience throughout the game, showing discipline against the Chiefs’ misdirection-based running attack. Here, Alex Smith opens to the right, and the running back’s first step is to the right. Common sense would lead the defense to believe the play is headed to their left, especially because the line steps that way, but Chiefs are actually running a misdirection to the field side.

At the snap, Kendricks takes a read step, shuffling to his left and mirroring the movement of the running back. As soon as the ball is handed off, he navigates the traffic of offensive linemen to sneak into the backfield, exploding to bring down the running back behind the line of scrimmage. Other rookies may have jumped to the left, losing gap responsibility and creating a running lane, but Kendricks shows patience in letting the play develop fully.

Like the first play, Kendricks carries himself like a linebacker who’s been in the league for years. The Chiefs bring two receivers from the left to the right of the offensive formation — a design to create confusion for the defense — but Kendricks isn’t fooled. He stays patient in the middle, shooting the gap and avoiding the oncoing guard to make yet another play at the line of scrimmage.

His footwork is aggressive as he shuffles into the scrum, and his ability to bring down running backs upon first contact is impressive given his relative inexperience in the league. Kendricks looks the part of an every-down linebacker for the Vikings, and he may go down as their best second-round draft pick in recent memory.