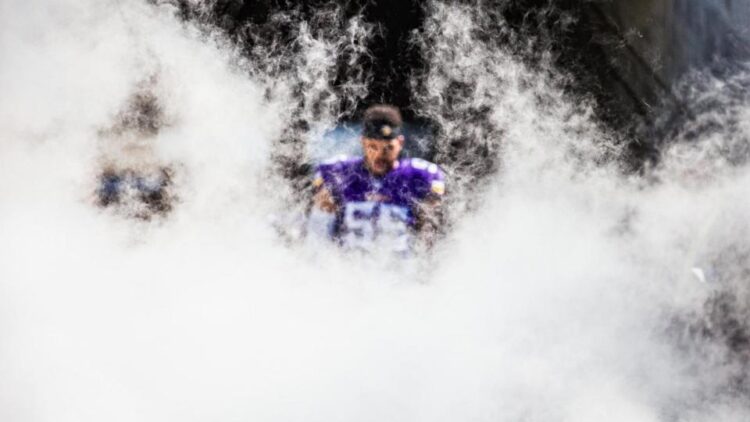 In this weekly series of articles, I’ll be breaking down what went RIGHT or what went WRONG each game for the Minnesota Vikings. This week, the Vikings punished the San Diego Chargers behind a strong running attack and consistent quarterback pressure from the defensive line.

These Minnesota Vikings have the look of a certain team approximately 1,660 miles to the West — the Seattle Seahawks. Before you comment or tweet in outrage, hear me out, because the similarities are too obvious to ignore.

Like their counterparts in the Pacific Northwest, the Vikings are built to succeed through two fundamental concepts; a strong running game and a fast, aggressive defense. General manager Rick Spielman’s draft strategies and recent free agent signings have helped him achieve the look and feel of the Seahawks on both sides of the ball, from the secondary to depth at running back.

That starts with Harrison Smith, who through three games is already considered the league’s best safety, per Pro Football Focus. He’s this team’s Earl Thomas, a “quarterback of the defense” who can cover sideline to sideline and attack the line of scrimmage in run support. At linebacker, Anthony Barr, Gerald Hodges, and Eric Kendricks exemplify many of the same traits that make Seattle’s mid-level defenders so dangerous — speed, versatility to blitz or cover, and instincts.

Beyond those position groups, the Vikings’ greatest defensive strength starts at the line of scrimmage. Everson Griffen is the anchor of the group, a force against the run and an elite edge rusher. He plays a similar role to the Seahawks’ Michael Bennett, who lines up across the defensive line and is by far Seattle’s most consistent rusher, having tallied seven sacks in 2014. Joining Griffen are Brian Robison, Scott Crichton, Justin Trattou, and two of the league’s best interior linemen — Sharrif Floyd and Linval Joseph.

With a mix of double A-Gap blitzes, suffocating coverage from the secondary, and aggressive play from the front seven, Mike Zimmer’s defense passes the eye test. Like the Seahawks, they fly to the football and are an opportunistic bunch who have forced six turnovers through three games in 2015.

On the offensive side of the football, the Vikings are taking the Marshawn Lynch approach to moving the football, and fortunately, have the running back to do so. Adrian Peterson, the original “Beast Mode,” leads the league with 291 yards on the ground and in the past two games, rushed the ball 49 times. Last season, the Seahawks ran the football 53.63 percent of the time, and this year, the Vikings are on pace to surpass that. They’re rushing on 54.88 percent of their offensive snaps, taking the football out of Teddy Bridgewater’s hands and forcing defenses to commit to the run.

Hopefully, as they did for the Seahawks during their Super Bowl runs, the defense’s loaded boxes open up opportunities in the passing game. Russell Wilson, for example, finished the 2014 season with 3,475 passing yards, 20 touchdowns, and seven interceptions in an offense tailored to the running game. When we take Teddy Bridgewater’s statistics through three games and extrapolate them to project a 16-game season, we get the following: 2,693 yards, 5 touchdowns, 10 interceptions. Underwhelming, yes, but Bridgewater is operating behind Adrian Peterson in Norv Turner’s offense, and he hasn’t been forced to win games with his arm.

As long as the formula — suffocating defense and a run-heavy offense — are leading to victories, the Vikings should stick to the plan. A similar one took the Seahawks to multiple Super Bowls, and the Vikings have a chance to get there very soon. If last week’s win over the Chargers was any indication, they’ve fully embraced this winning identity.

After the jump, Ill dive deeper into their performance and the building blocks being put into place for a successful playoff run.

Adrian Peterson is the most visible star on the Vikings’ roster, but his success hinges on the surprising play of a much-maligned unit — the offensive line. Reeling from injuries to Phil Loadholt and John Sullivan, the group was absolutely dominated by the 49ers in Week 1, missing free rushers and losing one-on-one battles up front. They’ve gradually improved week-to-week and they’ll need to continue their growth as a unit against the Denver Broncos this weekend, who currently boast the league’s best defense.

Their improvement begins with Norv Turner’s game plan, which put a heavy emphasis on inside runs against the San Diego Chargers. Per Sports Illustrated’s Andy Benoit (above), Turner opened the game early with zone runs to establish a physical presence at the line of scrimmage and give his linemen an edge in the attitude department.

Since his lackluster opening, Peterson’s looked like the running back fans remember and love. He’s finishing runs with power, using his burst to beat defenders to the edge, and displaying patience in finding running lanes. As I said before, his success, and the success of the running game as a whole, is dependent on the blocking up front. That’s why I’m going to skip Peterson’s film and focus my attention on two runs from Jerrick McKinnon and Matt Asiata. No matter how amazing Peterson looks, the examples below show how Turner’s offense can thrive when running backs run with purpose behind an offensive line that’s executing it’s assignments in tandem. Here, the Vikings are running a counter play between the right guard and the right tackle. On the right side of the offensive line, Kyle Rudolph, T.J. Clemmings, and Mike Harris block down, creating the illusion of a power play to that side of the formation. Joe Berger also blocks down, while left guard Brandon Fusco pulls across the formation to block Chargers linebacker No. 56. Berger’s block is especially difficult given the alignment of the defensive tackle, who has an advantage in a 3-technique (outside shoulder of the guard). That should allow the tackle to get in the backfield relatively quickly, but Berger is quick enough to reach and prevent him from crossing face.  On the edges of the formation, Matt Kalil seals the outside linebacker, while Rhett Ellison (backfield) is responsible for the opposite outside linebacker.

To the defense, the initial movement by the offense indicates a running play to the left of the field. The key blocks here come from Mike Harris, T.J. Clemmings, and Kyle Rudolph. Harris initially loses the battle with the nose tackle — and gets away with a hold — but does enough to create a crease for McKinnon. Like Fusco, he’s forced to cut off the defender in a difficult alignment (1-technique) and succeeds in doing so. Clemmings completely washes the tackle down across the formation, and Rudolph engages the flowing linebacker to open up the middle of the field. By design, McKinnon cuts the run back, exploding through the crease for a 9-yard gain. The blocks across the line are sound, and the defense (especially the linebackers) are completely out of position on the play. The flow from the offensive line and the pull by Fusco created the illusion of a run to the right, but McKinnon follows the blocks up front to take advantage of the misdirection fake.

At the end of the half, having just given up a touchdown to the Chargers, Norv Turner and the Vikings offense opted to wind the clock over driving the field for a late touchdown. Even in a run-first situation, the offensive line dominated the Chargers up front and allowed Matt Asiata to gain eight yards on the play.

Two double teams — one by Clemmings/Harris and the other by Berger/Fusco — spring Asiata free. Clemmings and Harris engage the down lineman before Harris peels off to block the second-level defender. Weddle avoids the contact, but in terms of timing, the double team is executed to perfection, with Harris separating just in time to occupy Chargers safety Eric Weddle. Clemmings flattens the defensive tackle and creates a cutback lane for Asiata up the right A-Gap.

Play-side, Berger and Fusco drive the defensive tackle back and inadvertently take out the linebacker, who jumps to the outside and loses gap responsibility on the play. Their defensive tackle is lined up in the A-Gap, forcing Fusco to crash down hard. Seeing this, the linebacker jumps to the B-Gap and takes himself out of the opposite A-Gap, which is exactly where Asiata goes.

Elsewhere, Kyle Rudolph and Jarius Wright criss-cross, creating a reach block on the outside and a crack block on the inside. Wright’s man (and Rudolph’s assignment) nearly makes the play, but not before Asiata springs free.

Much has been made of Mike Zimmer’s patented A-Gap blitzes and pressure packages; according to Pro Football Focus, Zimmer sent extra pressure on nearly half of Rivers’ dropbacks. In obvious passing situations, especially long third down opportunities, they confuse quarterbacks and force offenses into making quick decisions that usually fall short of the “sticks.” While Zimmer clearly made use of these, the beauty of his defense comes from the fact that he can generate pressure without blitzing.

Eric Kendricks and Anthony Barr spent much of the afternoon lined up in the A-Gap, but didn’t always blitz. Philip Rivers is one of the smartest pre-snap quarterbacks in the league, but these looks seemed to throw him off of his rhythm. More than that, they put extra stress on an inexperienced offensive line, creating communication issues up front and throwing off protection assignments.

In this example, protection assignments hardly matter, as Everson Griffen absolutely destroys Chargers left tackle King Dunlap with a bull rush. He convert speed-to-power, bursting upfield at the line of scrimmage before attacking Dunlap’s outside shoulder with a power rush. As soon as Dunlap steps and leans toward Griffen, the defensive end changes his rush, forklifting him into Rivers and forcing the incompletion. Mike Zimmer cooks up quite the zone blitz on this play, dropping three down linemen into coverage while blitzing two linebackers and a cornerback. Barr and Kendricks start the play in their normal alignment, but creep up into the A-Gaps just before the snap and put added pressure on the center. Captain Munnerlyn, the end of the arrow on the right side of the picture, is lined up in the slot and blitzes at the snap.

Once Rivers snaps the ball, Barr, Kendricks, and Munnerlyn rush the quarterback, while Griffen, Floyd, and Tom Johnson drop into coverage, taking away any intermediate throws. To make matters worse for the offensive line, Barr and Kendricks flip, taking the opposite A-Gaps from where they originally lined up. The flip turns the center, who commits to his first threat, which happens to be Kendricks. His poor decision leaves Barr a free rush to Rivers, and again, the presence of the pass rush forces Rivers to release the ball quicker than he’d like. If Rivers had avoided Barr on this play, Munnerlyn would’ve been there to clean up the sack. The well-designed blitz results in yet another quarterback hit for the Vikings. They controlled the line of scrimmage all afternoon, and Zimmer’s blitzes continually kept Rivers off balance in his pre-snap reads.

If the Vikings are going to come away with a victory over the Denver Broncos this weekend, they’ll need to replicate the performance as laid out above. The Seahawks, or “The Vikings of the Pacific Northwest,” found success shutting down Manning’s quick passing game with a similar approach last year and in the Super Bowl, and it’s easy to see the Vikings following a similar blueprint.

If not, we’ll probably be sorting through a “What Went Wrong” next week, and that’s never as fun. Stay tuned for more Vikings coverage, including offensive and defensive previews, my weekly Key Player Matchup segment, and updates on the latest Vikings injuries.