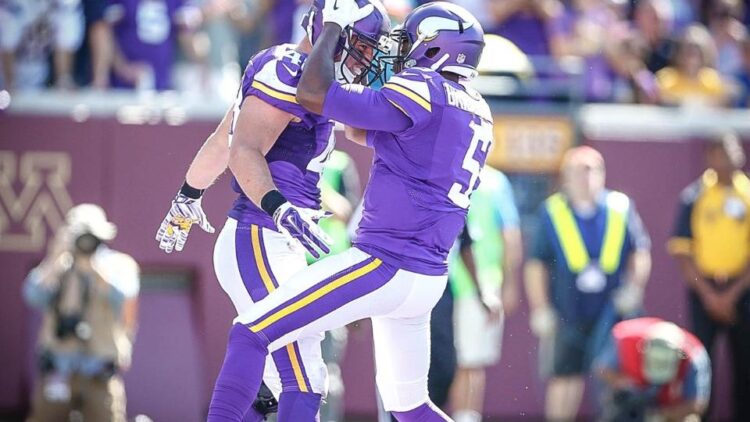 Over the last two weeks, we have seen the Minnesota Vikings (5-2) offense overcome two lopsided defensive efforts and come out victorious.

Two weeks ago, the Detroit Lions sold out to stop Adrian Peterson by flooding the running lanes and consistently stopping him in the backfield, only to let Teddy Bridgewater take advantage of some leaky coverage for over three hundred yards.

Last week, the Bears did their best to clog up all of Bridgewater’s passing lanes all afternoon, and Peterson was able to exploit the softer approach at the line for a 100-yard chain-moving performance.

This week, however, the Vikings offense will square off against a St. Louis Rams (4-3) defense that is talented enough to play well against both the run and the pass, overwhelm Minnesota’s offensive line, and pressure Bridgewater on a regular basis.

The Vikings will likely have to play great in all phases or be quite lucky to beat the Rams, and it is hard to predict which is more likely. They will need plenty of help from the defense and special teams to come out on top, but the offense needs to do their part if they want to avoid another close loss like they saw in Denver.

The first thing that should be mentioned about the Rams is that, like the Vikings defense, they are not at full strength. The Week Nine injury report features a number of prominent Rams defenders like defensive end Chris Long who will miss his third straight week. Defensive ends Robert Quinn (knee) and William Hayes (thigh) are both questionable, which could leave the Vikings feeling a little shallow on the edge of that intimidating defensive line.

Another key injury could end up being starting safety T.J. McDonald (foot) who would be replaced by Maurice Alexander if he can’t play. Quinn would likely be replaced by Eugene Sims if he is held out, and neither situation would be ideal for the Rams if it comes to that.

Setting injury concerns aside, the Rams defense is having a balanced season landing them in the top ten in the NFL by nearly every statistical measure. They’re only allowing 328.1 yards per game (6th), 230 passing yards per game (10th), 98.1 rushing yards per game (9th). That means if you have respect for what Mike Zimmer and the Minnesota Vikings are doing on defense, then you must also acknowledge that St. Louis is playing just as well (maybe even a little better) and deserves a lot of credit.

The Rams are only giving up 17.9 points per game (5th) and it can’t be emphasized enough just how big of a challenge this is going to be for Teddy Bridgewater and company as they attempt to make a legitimate playoff push.

The Rams defensive dominance begins in the middle. That is where linebacker James Laurinaitis roams and defensive tackle Aaron Donald creates chaos. Laurinaitis leads his team with 52 tackles while Donald has 4.5 sacks and seven tackles for a loss on the year. Center Joe Berger will certainly need help from his fellow linemen, and some extra blockers, to keep Bridgewater upright and Peterson churning forwards against this defending duo.

If the offensive line can hold strong, then Bridgewater still has to navigate his throws through a bevy of talented defenders. Trumaine Johnson and Janoris Jenkins man the starting corner spots, both of whom already have two interceptions on the year, and will both play a key part in trying to slow Stefon Diggs down for the first time since he has started playing.

Norv Turner’s offense has shown a commitment to Adrian Peterson and the rushing attack. Even when those runs mostly failed, like in Detroit, he has been able to convert those attempts into productive playaction passes and rely on a few long gains to put up enough points.

With any luck, the Vikings won’t have to score too many points to win this game, but the injuries are stacking up on defense for Minnesota and the ideal situation would involve a majorly impressive performance from Bridgewater at home. The Vikings will run the ball in front of that home crowd, but if Bridgewater can play all day long like he did in the fourth quarter last week, even this Rams defense shouldn’t be able to conquer the Vikings.

That is a lot of big “if” scenarios, however, and I’m expecting we see another frustratingly slow baby-step offense on Sunday. The Rams are excited about their season prospects and almost certainly will not be an easy opponent to best, especially their defense.

1.  The final inactives list will be available right here at Vikings Territory about one hour before kickoff. Be sure to check in, because the status of both Quinn and McDonald could have mammoth ramifications in the outcome of this game.

2.  I’m not always a fan of using a bunch of extra blockers, but the Vikings might want to consider just starting Rhett Ellison (if healthy) in place of Kyle Rudolph for his blocking abilities. Besides, as much as I hate to admit it, the catch and run abilities of Rudolph and Ellison are not that far apart right now anyways. Also, expect fullback Zach Line to see plenty of action blocking out of the backfield, especially if Aaron Donald starts to destroy our interior line.

3.  The Vikings better keep riding that magic carpet named Stefon Diggs if they want to keep winning. He is proving to be such a complete package and his ability to run after the catch is perhaps his most attractive trait. If Bridgewater can’t find the time to make downfield throws on Sunday, then Turner needs to actively manufacture touches for Diggs via bubble screens and quick outs. It is simply a must, in my mind, to keep putting the ball in his hands. He’s the best player on this offense right now.