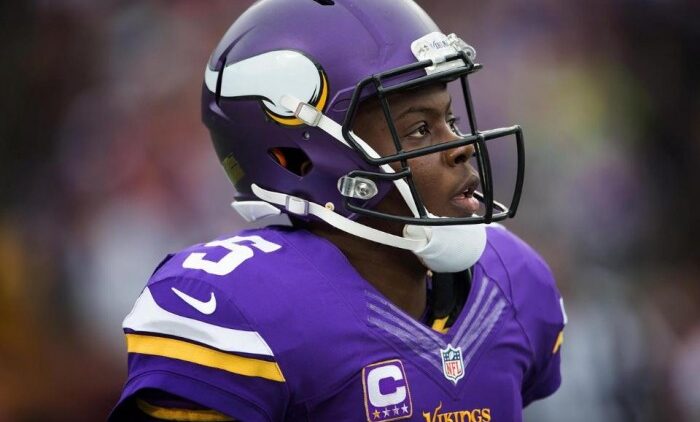 On Sunday night, the Vikings (9-5) will attempt to win their first primetime game since Christian Ponder was their quarterback and Leslie Frazier was their head coach. Although Minnesota’s opponent for Sunday, the New York Giants, will be doing their best to make sure the Vikings primetime losing streak continues.

However, the Giants (6-8) will be without their best player on offense in wide receiver Odell Beckham Jr. due to a one game suspension. This will likely play a huge factor in the outcome of Sunday’s game that will already feature a hot Vikings offense going against a consistently weak New York defense.

For the second straight week, Minnesota’s offensive line did not perform like it has all season long. Since their line has given up the seventh most sacks in the NFL this season, the Vikings linemen not playing like themselves is definitely a good thing.

In Minnesota’s victory over the Chicago Bears last Sunday, the Vikings offensive line only allowed a total of one sack to the Bears defense. Thanks to the play by the guys in front of him, Minnesota quarterback Teddy Bridgewater was not pressured very much by Chicago either.

The performance by the Vikings offensive line against the Bears certainly played a factor in Bridgewater being able to turn in a career day that featured him scoring a total of five touchdowns. Based on Minnesota’s opponent for this Sunday, Bridgewater could potentially have another career day when the Vikings face off against the Giants.

Coming into Sunday night, New York has one of the worst pass rushing defenses in the NFL this season. However, the Giants defense has found a way to sack opposing quarterbacks for a total of seven times in New York’s last three games.

Having allowed four sacks in the last two games, the Vikings pass protection is certainly improving as of late. In order to help his linemen, Minnesota offensive coordinator Norv Turner may have to continue calling quicker pass plays like he has in the past two weeks.

It is hard to ask for a better performance than the one that Bridgewater gave last week against Chicago. By throwing for four touchdowns and rushing for another, Bridgewater was clearly the driving force behind the Vikings victory over the Bears.

Minnesota seems to be running more pass plays that feature shorter drop backs and quicker throws in this past two weeks. Based on his last two games, this type of offense seems like a much better fit for Bridgewater.

In 11 of 14 games this season, New York’s defense has given up more than 250 yards passing to opposing quarterbacks. It seems as though it will be more of a head scratcher if Bridgewater does not have a big day against the Giants porous defense.

The performance of the Vikings rushing attack this week may solely depend on the status of running back Adrian Peterson’s ankle. The Minnesota running back injured his ankle late in the first half against the Bears last Sunday but was still able to play during the second half.

Peterson saw less action in the second half last week, but this was likely a precaution to prevent further injury from occurring. Even before his injury occurred however, Peterson struggled when running the ball against Chicago’s defense.

After averaging 106 yards rushing per game in the Vikings first 11 games of the season, Peterson is only averaging 50 rushing yards in his last three games. Have opposing defenses been figuring out how to stop Peterson or is Minnesota trying to shy away from an offense built around their 30 year old running back?

He may be able to get back on track this week against New York. The Giants rush defense is not exactly what one would call ferocious as they rank 21st in the NFL in terms of rushing yards allowed per game. Then again, the Bears defense was not too scary either heading into last Sunday’s game (26th).

During the game against the Bears last week, the Vikings found out that wide receiver Stefon Diggs is actually still alive and breathing. Diggs caught not one, but two touchdown passes against Chicago and Minnesota is hoping he is finally out of his recent slump.

Sadly, Diggs cannot play against the Bears every week as he has caught three touchdowns in two games against them and only one against the other nine defenses he has played against this season. Luckily for the Vikings, Bridgewater has been spreading the ball around to other players not named Diggs this year.

Including Diggs, 13 different Minnesota players have caught a pass this season. In the past two weeks alone, 11 different Vikings have been the recipient of one of Bridgewater’s passes.

Minnesota’s receiver’s should not have a problem continuing their recent production on Sunday night against New York. The Giants pass defense is so bad this season even Mike Wallace might be able to catch a touchdown for the Vikings this week.

In a game that might not even matter by the time game begins (Minnesota can clinch a playoff berth with a Seattle win or Atlanta loss), expect Minnesota’s offense to continue their recent production. Each player on this Vikings offense has an opportunity this week to have their best games of the season.

Look for Bridgewater to continue his love for playing games in December and for Peterson to get back on track. Few games this season have been a guaranteed win for Minnesota, but this will be about as close as it gets.