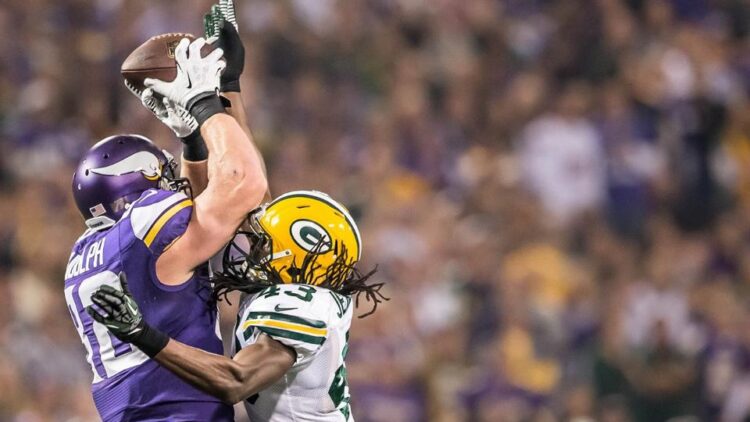 It’s probably safe to say that not many NFL fans would have predicted this scenario for the Vikings/Packers first match up of 2015. With Minnesota currently sitting one game over Green Bay and leading the NFC North Division, a victory over its rival will increase the Vikings’ record to 8-2 and give them some more breathing room in the standings.

Week 11 will arguably be the team’s biggest game of the season thus far, and you can bet there will be more than enough energy filling TCF Bank Stadium Sunday afternoon. Let’s take a look at the offensive picture for Minnesota.

In looking at last week’s win over Oakland, there were pros and cons from the offensive line.

The Vikings are continuing their positive trend of committing very few penalties, and the offensive line is playing its part there. In Sunday’s game against the Raiders, Minnesota was penalized just three times, one of those calls being a false start against Brandon Fusco. Coming off a 2014 season in which offensive linemen cost the Vikings a lot penalty yards, this year has been a welcomed improvement.

The unit blocked fairly well for Adrian Peterson, helping him to his 203-yard game, but solid protection of Teddy Bridgewater was sorely lacking. The O-Line allowed four sacks against its second-year quarterback; the sacks came at the hands of four different defenders, and no one player on the line can take full responsibility. The Packers have 23 sacks on the season, and Minnesota’s line will be facing the notorious Clay Matthews (4.5 sacks) as well as former Chicago linebacker Julius Peppers. Peppers may be 35, but he is still going strong and leading Green Bay in sacks with 5.5.

Green Bay’s defense ranks No. 23 overall and has been struggling as of late, but fill-in center Joe Berger and his men could still have their hands full Sunday against some talented linebackers.

In last week’s preview, I predicted that Bridgewater would increase his passing yards by quite a bit. I was wrong. Bridgewater attempted just 22 passes (connecting on 14 of them) and ended the game with 140 yards.

The Packers’ passing defense ranks No. 21 overall, allowing opposing quarterbacks to pass for an average of 255.3 yards. In their three losses since the bye week, the Packers have allowed an average of 293 passing yards per game. If Bridgewater even comes close to this type of number, the Vikings should be very successful.

Peppers stands at No. 17 in the NFL (tied with Everson Griffen) for sacks, and he poses a threat to Bridgewater; it will be up to the offensive line to give him the time in pocket he needs to make good decisions.

As far as the secondary goes, Green Bay is averaging just about one interception per game, with second-year safety Ha Ha Clinton Dix holding two of those.

Although I certainly don’t want to see Minnesota in a come-from-behind situation, Vikings fans should hope that Bridgewater plays with that mentality, as he seems to make his sharpest passes in those “desperation” scenarios.

If there’s one game for which I’m not worried about Peterson, it’s a Green Bay-Minnesota match up. The running back thrives in high-pressure, high-energy situations, and Week 11 will be exactly that. Peterson had his biggest game of the season last week against Oakland, and you can be sure he’s raring to go again this week—especially at home.

Green Bay’s rushing defense ranks No. 24, and the unit has allowed an average of 116.2 rushing yards per game; if the offensive line blocks well for Peterson, he could easily hit that number and beyond.

Although Stefon Diggs has had quite the season so far, Minnesota defeated the Raiders without much noise from the rookie. Diggs came up with two receptions for 46 yards last week, while Mike Wallace followed with a single catch for 22 yards.

Bridgewater will need to connect with both Diggs and Wallace in order to keep Minnesota in the game offensively, and I’m expecting to see offensive coordinator Norv Turner throw some other receivers in the mix, as well. Both Cordarrelle Patterson and Adam Thielen got in on a few downs last week, which is helpful in keeping Green Bay’s defense guessing.

Kyle Rudolph made the “highlight (blooper?) reel” last week when he flat-out dropped an easy touchdown pass; Rudolph has garnered plenty of skepticism this year, having only 182 yards under his belt, and the tight end will need to have a big game Sunday to begin earning back a positive reputation.

Although the Packers’ secondary doesn’t necessarily feature a star defensive back, Clinton Dix and corner back Sam Shields each have two interceptions this season and can prove dangerous on any given Sunday.

Aaron Rodgers has been struggling as of late, but the Vikings know he cannot be taken lightly. In order to plan on a Week 11 win, Minnesota’s receivers need to find their way into the end zone.

Green Bay’s offense has been self-destructing as of late, and the squad comes into Minnesota Sunday following three consecutive losses. As positive as that may feel to Vikings fans, it also means Rodgers and Co. will be playing with a gigantic chip on their shoulder … and that’s dangerous. All things considered, though, the Vikings have the momentum on their side in addition to home-field advantage, and I’m calling Sunday a win for the Purple.