2015 Minnesota Vikings: A Step Towards Analytics 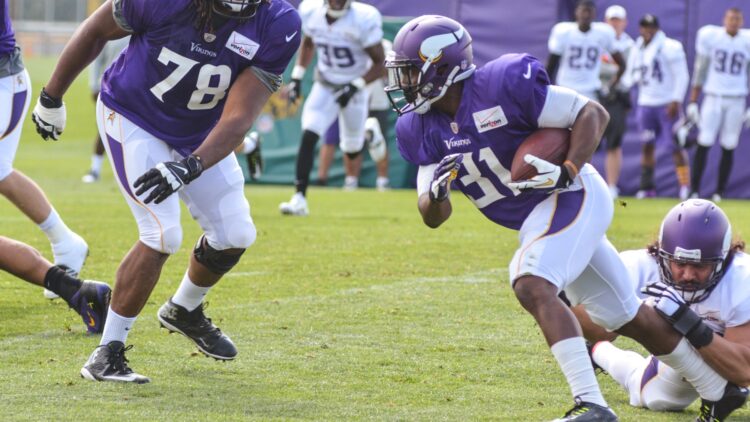 Anyone following the Vikings presser with Rick Spielman before the draft as he previewed (or refused to preview) the Minnesota draft plan for 2015 probably caught the word “analytics” a few times, a discussion that came up as a result of one line of a nine minute prepared statement he provided the press.

We’ll see the results of that kind of approach today and in the next few days of the draft. There’s a very real possibility that because of the results of research finished “this year” on how to approach the draft, that the past three years are not in fact a good guide into how Spielman will take on this year’s draft.

We know him as a wheeler and dealer, but if research has found that the top of the second is better than the bottom of the first, we may see a different trend.

But there’s so much more potentially at stake.

Analytics are a press draw and provoke discussions fraught with misunderstanding and arguments about “the right way” to do things. It’s easier to shed the word “analytics” when possible and characterize it thusly: Spielman’s approach to this year’s draft was characterized by a heavier use of data tools to create advantages in every part of the draft process.

While generally understood within narrow applications—evaluating players—Spielman mentioned the use of new information approaches that could provide the Vikings with an advantage as the years go by when it comes to drafting.

Though the Vikings do not have anyone in-house working on some of these problems, they have consulted heavily with an outside “guy or girl” to improve their process.

“You always go with what’s on tape,” Spielman said, clarifying that the evaluation process for players centers on traditional scouting methods and on-field play. “It’s more used for breaking ties.”

With players clumped together during the evaluation process, it could be a useful method of cleanly sorting through similarly-ranked players, giving the edge to a receiver that might have larger hands or better growth projections based on frame considerations—like bone girth and body-fat ratios.

“We’ve had multiple discussions of three or four guys at a position that are clumped. I’ve got eight different opinions on those guys. The analytics will kind of tie in and help break those ties.”

That’s one dimension of data analysis—using production metrics like market share, advanced stats like yards after contact or yards against stacked boxes, workout metrics like speed score and psychological profiles in order to predict player capability; something the Vikings admitted to using last year when it guided one of their third-round picks: “Analytics played a part in drafting Jerick McKinnon.”

McKinnon had one of the best combine performances in recent memory, much better than any player not named Bud Dupree at this last combine and better than anyone in 2014, including Aaron Donald. Despite playing as a triple-option quarterback working with a blocking scheme reliant on misdirection, the Vikings felt confident his skill set would translate to running back.

The idea that analytics provides just one more voice in the discussion is a strong one, and generally speaking is one held by most of the statistics and analytical community when it comes to sports. It is, after all, looking at new information in a different light—just like finding out that there’s a game where a receiver played against press coverage for all 60 snaps.

It’s useful to add context to any discussion, but I think it’s only the first step of using these developing strategies. “Breaking ties” gives it a tertiary voice in the room, but still a powerful one given how often ties occur in the evaluation process.

There should be some mechanism to give these tools a larger voice if there’s retrodictive evidence (i.e. that the current models can predict past data) that is somewhat strong. One of those methods is the force players metric developed by Justis Mosqueda, which has been very powerful. In the case of that metric, it can be used to eliminate players from consideration, while allowing the other players to be ranked by the evaluators as normal.

Another method of using player evaluation data would be to simply interrogate it. That is, if there is good evidence from a statistical or algorithmic standpoint that a player will or should not succeed, but the tape evaluators disagree, the automatic response shouldn’t necessarily be to prioritize one over the other (though having a method to resolve disputes is good, too).

Instead asking why those two viewpoints disagree is critical. Perhaps the tools didn’t take into account injury? If so, that’s a relatively easy fix. But if the tools are a little more sophisticated or outright disagree with the evaluator on a specific concern, those questions can be interesting. Say a linebacker produces a low share of his team’s tackle-for-loss totals but the evaluator made a specific point to say the LB makes plays behind the line of scrimmage, looking at the discrepancy can be revealing.

If those plays are simply force or squeeze plays to force running backs inside, then it speaks to the discipline of the linebacker and the schematic responsibilities. If that linebacker alters the running back’s stride or chases him into another player while fully intending to tackle that runner himself, it could speak to the evaluator underprivileging that player’s ability to finish or missing a lack of closing speed.

There are hundreds of potential disagreements, and the existence of those disagreements could be just as valuable as figuring out who is right. And that’s only a small piece of the broad puzzle that is “analytics.”

The media discussion of analytics often focuses on player evaluation, but Spielman was just as enthusiastic about its applications in determining draft value, draft inefficiencies and ways to develop players, not just find them.

Even within a particular type of data tool, there are subsets and approaches that need to be flexible or change (like we saw above).

“From a psychological standpoint, we get a lot of different results—combative attitude, social maturity, coachability. You know, we’ve got ten different categories we look at; I’m not going to go into all ten of those, we’ve got a couple of examples of it. And each of those categories—it’s weighted different for each position.

“So a corner is not going to have the same psychological makeup as a middle linebacker. When all those things we test from a psychological standpoint, there may be weighted … it’s weighted according to their position.”

Those categories may provide data for evaluation, it’s true—they can help break ties on prospects or answer questions about work ethic and off-field concerns.

But they can also provide actionable information after you acquire that player. It could include information on how to best teach a player already on the roster. Data tools can also be used to project injury risk or figure out the best ways to avoid future injury for a player.

And the draft provides many more opportunities for new data tools to be useful. Without using analytics to evaluate a player, one can find the best places to draft certain positions or which picks are most over- or under-valued by other teams. Trading out of or into those picks could provide a lot of benefit down the road.

Rick Spielman has earned a reputation for being geeky about numbers and data, but the Vikings evidently ranked low on the list of teams who have bought into analytics, earning a “skeptic” label from Kevin Siefert for ESPN Magazine.

ESPN may have to revise that stance though, with all the focus the Vikings have given these concepts in these past two years. There’s strong evidence that Minnesota pays attention to the evolution of certain ideas within data—like grabbing three of the 17 available “force players” from last year’s draft class: Anthony Barr, Scott Crichton and Rakim Cox; unlikely to be a coincidence.

The Vikings have strong tendencies that I feel are driven by this notion of information gathering and study. They’ve drafted younger players, and have not drafted a player 23 or older in the past three years, a popular trend among NFL data analysts (at least according to Pro-Football-Reference). They seem to maintain round values for positions, like late-round guards, mid-round receivers and an abhorrence of the second round for any position.

Hopefully the Vikings continue to take these steps forward when it comes to data analysis. Not because data analysis is superior to traditional methods of problem-solving, but because they can enrich them.

“It adds value. It’s not the be-all end-all that I think more and more we use it the more it evolves each year and it’s becoming a pretty good tool for us.”