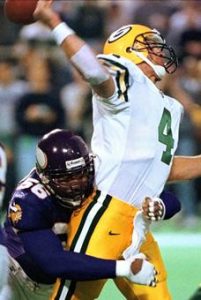 A couple of months ago, I had the pleasure of visiting the Pro Football Hall of Fame in Canton, Ohio. I told some of our regular visitors on Vikings Territory that I would write about my experience and report back at how amazing it all was. Unfortunately, it was during holiday season, I was visiting family, stuff came up and I just never got around to it.

Needless to say, the Hall of Fame was incredible.

Being surrounded by so much history and the legacies of so many football greats was really humbling and enriched my appreciation for the great sport of football. As an avid Vikings fan, upon entering the actual hall itself, I immediately began scouring the walls for all the Minnesota greats. Fran Tarkenton, Bud Grant, Alan Page, John Randle… I saw all of them. And while I am not lucky enough to have experienced watching [most] them while they were still playing, I stood in front of each – paying my respects.

Well yesterday, one of those questions was addressed while the other went unanswered. Chris Doleman, Vikings defensive end great,  has officially been announced as a member of the Pro Football Hall of Fame Class of 2012. He will be accompanied by center Dermontti Dawson, defensive tackle Cortez Kennedy, running back Curtis Martin, cornerback Jack Butler and offensive tackle Willie Roaf (notice the name “Cris Carter” is nowhere to be found in that list).

Obviously, it is awesome that Chris Doleman is receiving such a great honor. Unfortunately (at least for me anyway), the disappointment of Cris Carter being overlooked again dampers the occasion a bit. I’m sure Carter will end up in the Hall of Fame eventually – it would be an outrage if he somehow didn’t. But one has to wonder, why hasn’t it happened yet? Carter is undeniably one of the NFL’s greatest receivers of all-time. Only Jerry Rice has surpassed him in career receiving yards. Carter was never able to win a championship, but that isn’t really a reflection of his greatness. Isn’t being granted entrance into the Hall of Fame an acknowledgement of personal achievement (not to suggest that the team doesn’t matter… but you know what I mean)?

I would love to hear the reasoning behind Cris Carter being snubbed entry… again.

And guess what? It doesn’t end there…

Jared Allen, the man who fell short a half a sack behind breaking New York Giants Michael Strahan’s single-season sack record with 22 sacks, was not selected as the NFL’s Defensive Player of the Year. Instead, the Ravens Terrell Suggs, who totaled 14 sacks on the year, was bestowed the honor; leaving another Vikings player high-and-dry. Obviously, I’m biased here, but when comparing the stats of these two players, it seems obvious to me that Allen had the better year. Unfortunately, these awards for individual achievement tend to be majorly influenced by how well their team did – a category Allen did not fare well in.

How do you all feel? Is there any justification for Carter being denied (again) entry into the Hall of Fame? Did Suggs deserve the Defensive MVP award more then Jared Allen? Try and be objective (if you can – it’s tough) and tell us what you think in the comments.