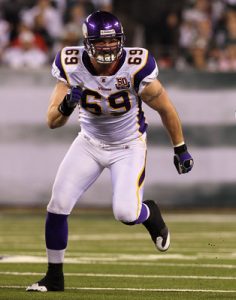 [NOTE FROM ADAM:  This is another installation of my position-by-position breakdown of the Vikings offseason.  You can click the links to view previous installments:  The Passers, The Runners, The Wide Outs, The Tight Ends, The Offensive Line, and The Defensive Tackles.]

Perhaps the most exciting thing about the Minnesota Vikings in 2011 was their ability to get to opposing quarterbacks.  The team was tied with the Eagles for the most sacks with an even 50, and Jared Allen came within mere inches of breaking the all time sack record.

There is no doubt that the Vikings defense needs some serious work, but the defensive end position is fairly solidified.  Still, there are options the Vikings have, and evaluations to take place.

Right end Jared Allen enjoyed the best season of his career in 2011 from an individual standpoint.  He had 22 sacks and made an otherwise meaningless season finale into an exciting journey, which came up just short, towards the all-time sack record held by Michael Strahan.

In addition to his knack for rushing the passer, Allen enjoyed a stronger than usual season as a run stopper.  He had 66 tackles, which is the most he has had in a season since joining the Vikings.  He had his hand in a number of short yardage stops and seemed to be running high octane all season long.

On top of those solid statistics, Allen managed to produce a number of big plays throughout the year.  He account for the only defensive score the Vikings had all season long with a safety.  He also caused four fumbles, batted down three passes, and picked off a pass displaying surprisingly good hands.

On the other side of Allen, Brian Robison finally got his chance to start at left end, but after a hot start to the season he seemed to fade and really turned in a pedestrian year.  He somewhat put durability concerns to rest by starting every game of the season, but the question shifted to endurance when his production began to dip.

Robison ended the season with 44 tackles, eight sacks, three forced fumbles, and one batted pass.  He had his good moments, but in the end he was unable to ever really display dominance of true consistency.

Everson Griffen had troubling offseason prior to the 2011 season, featuring multiple arrests, but he was able to give the Vikings something to think about with his incredible athleticism and physical attributes.  Griffen didn’t get a single start but he contributed in all 16 games of the season as a backup defensive end, a passing down defensive tackle, even a little outside linebacker, and was very interesting to watch as a gunner on special teams.  He ended the season with 21 tackles, four sacks, two defended passes, and a forced fumble.  Griffen’s ability to produce, combined with his ability to get on the field by being versatile, made him a valuable part of this team going forward.

Adrian Awasom played in the season opener, recording three tackles, but didn’t stick to the roster after that debut.  Rookie D’Aundre Reed was never able to contribute at all.

The good news here is that the Vikings are in no danger of involuntarily losing anybody this offseason.

Jared Allen has two years left on the deal signed after being traded to Minnesota by Kansas City.  He is due to make $11.6 million in 2012 and $14.3 million in 2013.  Given his rise in production, the Vikings need for cap space, and these high figures, the team may try to restructure his contract via an extension to ease the cap hit and ensure Allen finishes his career as a Viking.  He will turn 30 soon, but I highly doubt the Vikings will be ready to part ways with him when he is only 31 years old next offseason.

Brian Robison signed a three year deal prior to the lockout last offseason worth $14.1 million, with a $6.5 million signing bonus.  Robison’s base salary is scheduled to be only $726,000 in 2012, but his cap number is likely much higher due to the bonus.  The final year of his contract is 2013 and that base salary is $864,000.  Robison is currently 28 years old.

I really don’t think the Vikings will be in the market for any starters at defensive end.  Allen is a given to start on the right side, and Robison and Griffen seem likely to compete with each other for snaps on the left side.

Outside of those three, Reed is really the only depth available so the Vikings are likely looking to provide inexpensive depth instead of make any big splashes.

Sure, it would be fun to day dream about big name free agents like Mario Williams, Robert Mathis, Jeremy Mincey, or Cliff Avril joining Jared Allen on the defensive line, but something like that is very unlikely to happen.

Instead, look for new Defensive Coordinator to lobby for low budget guys with whom he is familiar, such as Jamaal Anderson or Tyler Brayton, to provide some training camp competition.  Brendan Daly, the new defensive line coach, may also vouch for a guy like C.J. Ah You whom he coached in St. Louis.

Still, I think the Vikings are most likely to add depth via the draft or in the very late stages of free agency.  Don’t hold your breath for any sort of major deal here.

Quinton Coples (North Carolina) is really the only defensive end worthy of consideration in the top five, but it would be a shocker of major proportions if the Vikings decided to select him at number three.

Instead, the Vikings will likely look much later in the Draft for guys that fall to them and present very solid value.

Guys who saw their production slump thanks to coaching and scheme changes like Cam Johnson (Virginia) or Julian Miller (West Virginia) could end up being steals should they be available in the fourth round or later.

Olivier Vernon (Miami) is a talented player that received a six game suspension by the NCAA.  He should slip pretty far in the Draft as a result, but could end being a sleeper pick due to his potential.

I think talent and depth in these free agency and Draft classes could lead to some interesting veterans being released by other teams.  If solid depth can be attained by offering up a veteran minimum contract later in the summer, then patience could certainly pay off for the Vikings.

Outside of that, I think it is a very real possibility (and one that isn’t really being talked about) that the Vikings try to extend Jared Allen’s contract in an attempt to lock him up beyond 2013 and also shave the salary cap a little bit.

Jared Allen will start at right end.  Brian Robison and Everson Griffen will compete for playing time at left end.  D’Aundre Reed will likely compete with inexpensive free agents, late round draft picks, or undrafted rookies to fill out the depth chart.