Rushing Adrian All Day May Have Been A Mistake 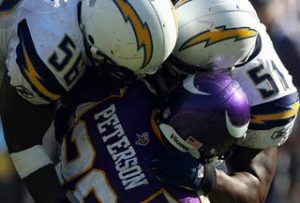 All offseason long, as pointed out by Kevin Seifert, first year head coach Leslie Frazier made it clear that he planned on making Adrian Peterson the team’s workhorse as his formula for success. As evidenced by the reported $100 million deal Peterson signed just prior to week one, the Vikings feel he can take over and dominate any game.

On Sunday, however, it became clear that this offense needs more than one platinum running back to win football games… even the games they appear to have in the bag.

The team ran the ball on 15 of their 19 first downs which is being criticized as too predictable of a offensive game plan. Peterson ended the day with 16 carries for 98 yards, and save for a 46 yard bolt he had a fairly pedestrian outing.

The Vikings ended the day with 26 runs and 15 throws, with four of those runs coming from quarterbacks Donovan McNabb and Joe Webb.

I am just being my normal old self, and not just being contrary for the hell of it, when I say the run to pass ratio had far less to do with this loss than the simple fact that the Vikings couldn’t execute in the passing game.

I mean, their average yards gained per passing play was a whopping 1.6 yards. That dog just isn’t going to hunt.

Even Frazier himself, however, seems to agree with Seifert’s observation that the Vikings game plan was not balanced enough to warrant success.

“That is something you have to guard against,” Frazier said. “They were stacking the line of scrimmage, and when that happens, you have to take advantage of that down the field. That is something that we are going to a look at. Adrian is such a threat, and such a focal part of our offense, we have to be aware of how people are going to try to defend us. This game will hopefully be one of those games that we look back on and will have helped us.”

It sounds like we can expect the Vikings to examine their game plan and look for ways to improve, which could include more passing attempts on early downs, but what the film is going reveal to anyone that knows anything is the Bill Musgrave’s offense simply failed to do its job.

The result was a downward spiral, which Vikings fans are all too familiar with, towards frustration penalties and an exhausted defense on their way to losing a game they had every chance to win.